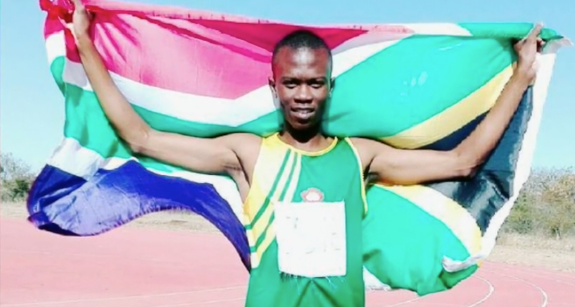 Derrick Mokaleng has instilled this routine into his everyday life and it shows when he’s on the track.

Mokaleng finished in second place and recorded a time of 1:08, just 0.02 seconds behind Vincent Crisp, the Texas Tech runner who set the collegiate 600 record.

“Honestly with that race, I just went there to run the race,” Mokaleng said. “I wasn’t thinking of running a good time because I wasn’t feeling good going into the race. Then on the last lap, I just decided to stick with the guy from Texas Tech and then we just pushed each other to the line. We found out later that we ran the two fastest times in college history,” he said with a casual shoulder shrug.”

Coming to the United States from South Africa, Mokaleng had to adjust to the differences. He says the track structures, weather conditions, coaching and workouts are all different than back home.

“At home, I focused more on endurance and coming here now I focus more on speed and strength,” he said.

Mokaleng also holds the fastest 400-meter time in NCAA Division 1 after recording a 45.17 at the Sun Angel Classic in Tempe, Arizona, on April 8, 2018.

“His work ethic and his commitment to the sport are what make him so special,” he said. “If you take your three to four hour practice days, student-athletes have another 20 hours to themselves.”

Anderson said it’s what athletes do with the remainder of their day that dictates their success.

“I have a calendar on my wall where I mark down all my times that I want to achieve each year,” Mokaleng said. “Every time I reach those goals or times I’m just happy with my progress and the work I’ve put in.”

Mokaleng said he discovered his passion for running at seven years old when his dad got him and his two siblings interested in the sport.

“My life has always revolved around running,” Mokaleng said. “That’s all I knew in high school, all I did was run.”

He said when he was younger he wasn’t always the most talented of athletes, but he credits his recent success to God.

“I was always small and I wasn’t the strongest athlete,” Mokaleng said. “I think that my strength and all the things I am able to accomplish on the track is because of God and his grace. It’s a blessing from God just the talent that I have today so I just give it all to Him.”

With two more years left at TCU, Coach Anderson said he hopes Mokaleng continues to grow as a person and athlete.

“He’s becoming a man– he’s away from home, he doesn’t have parents here to give him the guidance,” he said. “I give him as much guidance as I can on and off the track but I also have to allow him to grow. But at the end of the day, my goal for him is to get his college education and his degree.”

Although Mokaleng is in Fort Worth for 10 months of the year, he still finds ways to represent his country on the track.

Anderson said Mokaleng ran on the South African junior team and is hoping to represent South African in the World Championships next year.

“Every time I put on the green and gold of South Africa I feel proud because I know I’m not just representing myself and my family,” Mokaleng said. “I’m also representing the country, the people of South Africa. Just being able to represent TCU and my country is one of my proudest moment I can think of.”

At the 2018 TCU All-Sports Banquet, Mokaleng was awarded the Male Breakout Athlete of the Year.