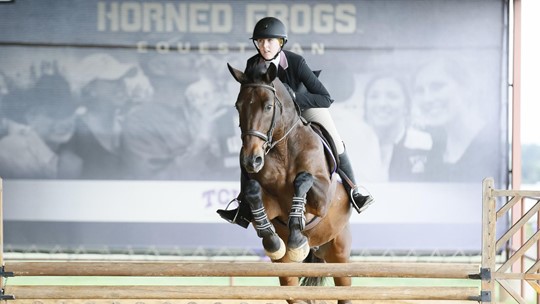 The sixth-ranked TCU equestrian team defeated No. 8 Oklahoma State, 11-9, on Friday as they earned all four Most Outstanding Performer Honors in the victory and came back from a late deficit to win.

The team received seven points in the Hunter Seat arena, four of which came on the Flat.

“We’ve had a couple of tough weeks,” said head hunter seat coach Logan Fiorentino. “They have had to get better, and they have to learn, and it’s exciting to see that commitment pay off.”

During Equitation over Fences, TCU’s Grace Upshaw earned a 71-68 victory over OSU’s Katie Schell to start the event. Alex Benson received a score of 81, which was the highest score of the event.

Elizabeth McKim won her first MOP of the season with a score of 78 on Fats.

During Horsemanship, Anna Hauter scored a 75.5 to get the Frogs their first point, while Jamie Cook defeated OSU’s Maddie Bender 77-72.

Trailing 8-7 late in the match, Niki Barnes’ score of 92 in Equitation over Fences started a comeback that would lead to their eventual victory. Janelle Henninngsen and Jacey Albaugh would follow with back-to-back victories to secure the win. Albaugh captured the second MOP of her career with a score of 89.

“It was really impressive for such a young group to be able to keep its focus like that,” said Fiorentino. “That is what I am most excited about, the maturity that they showed and the ability to compete.”

TCU will close out the fall season Nov. 9 against SMU.

The men’s and women’s swimming and diving teams suffered a trio of losses on Friday in a double-dual meet at SMU.

Junior Dayne Odendaal captured a pair of wins against the Mustangs in the 1000 free and 200 IM, and first-year Noah Cumby won the 200 free on the men’s side.

For the women, junior Nicqueline Rettberg won the 500 free, while sophomore Kiki Rice won the 200 back and 200 fly over Iowa State.

Sophomore Isabella Ashdown won the one meter dive with a score of 252.

The teams will return to action next weekend for a home meet against Trinity.

The Horned Frogs continued their hot streak as they finished second overall in a field of 17 at the Battle of the Beach in Cabo San Lucas, Mexico. They had won their last two tournaments.

Their 7-under 277 in the final round set a single round program record. Junior Greta Bruner’s final-round 67 led the team. Bruner would finish third overall.

Sophomore Grace Do and first-year Sabrina Iqbal finished ninth and 12th overall after shooting 70 and 69 in the final round.

“What a great way to cap off our fall season,” said coach Angie Ravaioli-Larkin.

The team will return to action Feb. 10 when they open the spring season in Puerto Rico.

Jonathan is a journalism major from Philadelphia who is also minoring in Spanish. When Jonathan is not writing for TCU 360, he enjoys watching his favorite sports teams (76ers, Eagles, Union, Phillies, and Flyers).