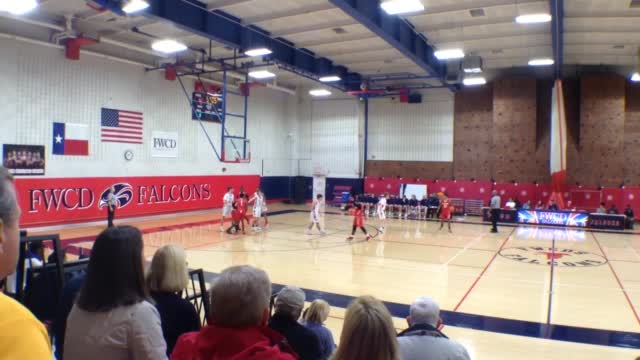 Fort Worth Country Day improved their performance during the second half of Friday night, January 18, basketball game, but St. Mark’s School of Texas proved too talented and defeated the Falcons 49-39.

The Falcons knew it was going to be a tall task. St. Mark’s is nationally ranked and many of the players are being recruited by Division I colleges. FWCD head coach Joe Breedlove employed a deliberate tempo to keep the Lions out of rhythm, but the early deficit proved too much to overcome.

Several possessions were made against the Falcons as they swung the ball around the perimeter of the court looking for openings. They struggled to find those openings on the night, shooting 16-38 (42.1 percent) from the field.

FWCD was led by the duo senior Drew Chilcoat and sophomore Ayris Gratts-Cole.

Chilcoat led the team in scoring 12 points on 5-11 shooting from the field. Gratts-Cole chipped in nine points and grabbed 12 rebounds in an impressive individual performance.

Junior Andrew Laczkowski, coming off an offer from the University of San Diego, led the way for St. Mark’s. His combination of size and ball-handling was difficult for FWCD to contain.

Laczkowski isn’t the only big name on the St. Mark’s roster: First-year forward Colin Smith has an offer from Kansas and first-year guard Noah Shelby received an offer from Baylor.

The loss drops FWCD to 0-1 in the Southwest Prep Conference.

Friday night proved much more successful for other area high schools, however: both Paschal and Arlington Heights emerged victorious from their respective basketball district clashes.

Paschal defeated the Fort Worth Young Men’s Leadership Academy 44-43 in a low-scoring affair. The victory moves Paschal to 4-5 in district 4-6A play, placing them fifth in the league.

Arlington Heights will head on the road for an away game against Southwest on Tuesday, January 22, at 7:30 p.m. Southwest (17-9, 6-2) is directly ahead of the Yellowjackets in district play.

Nick is a senior journalism student from Cleveland, Ohio. He covers the TCU soccer team for TCU 360. Nick is an honors student and is minoring in music.