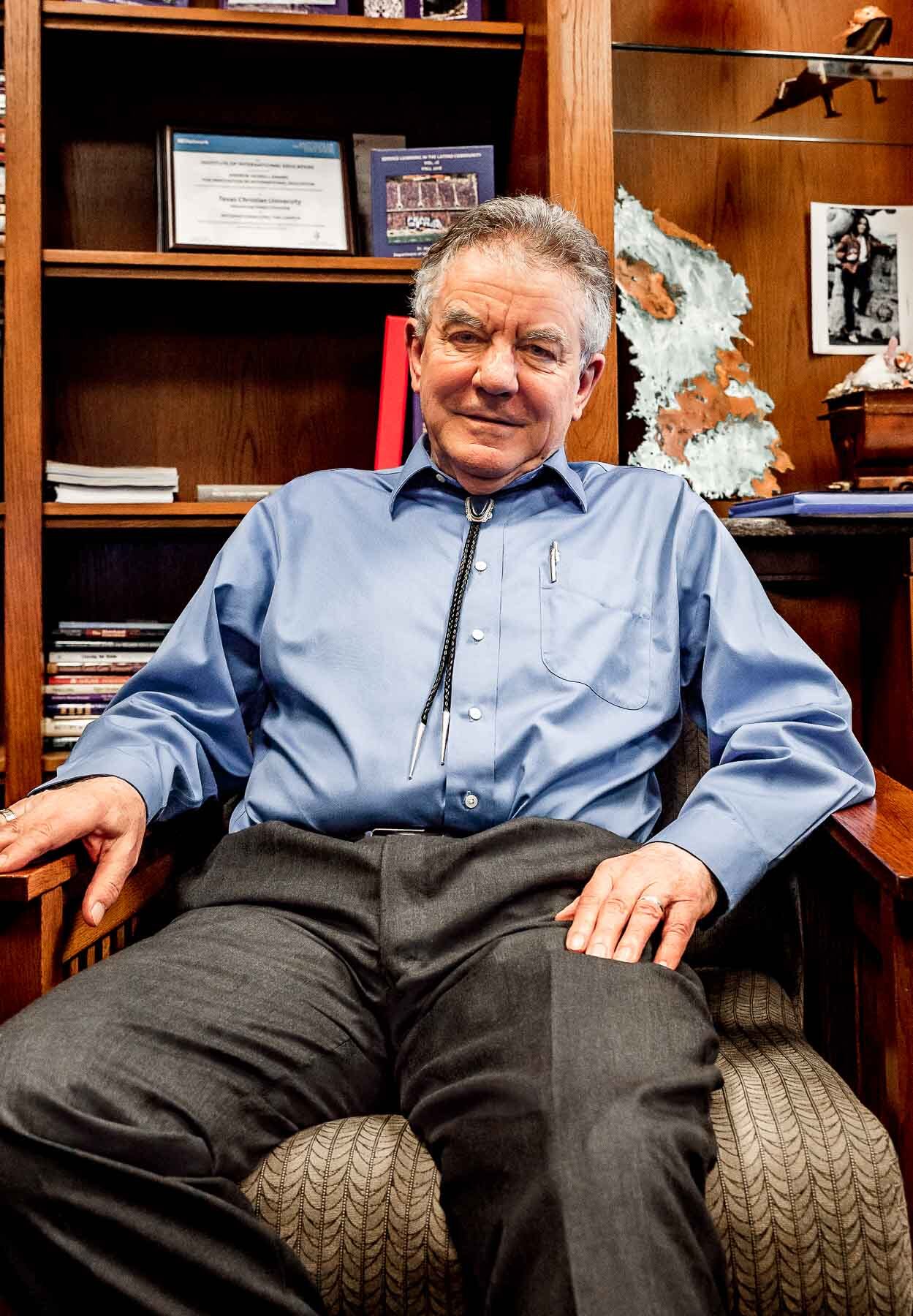 In a matter of days, the semester will be over and Dr. Nowell Donovan’s 15-year tenure as TCU’s chief academic officer will draw to a close.

The office in Sadler Hall, once filled with sketches of Scotland and fascinating rocks, will be cleared to make room for his successor, Dr. Teresa Abi-Nader Dahlberg.

During his time as provost, TCU transitioned in the academic ranks from a regional university to an upcoming national institution. But that’s not what Donovan thinks of as his legacy.

“I would like people to remember the fact that I tried very hard to create a compassionate and congenial university,” said Donovan, 75. “A place where people could come and enjoy themselves.”

Donovan left his mark on campus by creating a series of landmarks meant to add more dimension to campus life.

The stones that stand among the trees that line the lawn in front of Erma Lowe and Betsy and Steve Palko Halls are an homage to the rock formations on the British Isle and Donovan’s homeland of Scotland.

The rock formation in Scotland is said to embrace the circle of knowledge.

“Where I come from, the British Isles in general, there are about 2,000, maybe 1,500 to 2,000 monuments involving great stone, large stones. They are called megalets,” Donovan said. “Some of them are just a single standing stone, others are stone circles, others are complicated graves.”

The culture that put them up operated up to 7,000 years ago. No one is sure why the rock formations are out there in the British Isle, but the ones along South University Drive were meant to keep people off the grass.

“So, I used to walk in the early days… get a coffee from Einstein’s. Usually, a straight walk since [Palko] wasn’t there,” he said. “There were concrete paths and people would cut the corners and mess up the grass… so there were stones put there to stop people from driving over the grass.”

He said that the stones were placed in an unorganized matter, and wanted to do something a little more organized. Hence, Donovan came up with the idea of Frog Henge.

The recumbent stone, which lies on its side, came from Idaho. He said that this stone in any formation always points southwest.

Using a special measuring unit, Donovan used other stones from Oklahoma to create a circular formation.

Three other stones, known as the outlier stones, are placed outside the circle.

Elizabeth Gillaspy, director of the School for Classical & Contemporary Dance, said students and faculty in the program use Frog Henge as an outdoor classroom space and a site-specific location for dance composition and choreography classes since it is right outside Lowe.

“I have so much respect for Dr. Donovan, and I deeply appreciate the signature landmarks that he has created for our institution,” she said. “Some of the things he has spearheaded on this campus feel really connected to artistry, creativity, imagination and all the things we really value as a school.”

From 2004-2014, “Bard on the Rocks,” a Halloween reenactment of all of the witches scenes from “Macbeth” was staged at Frog Henge.

Lydia Mackay, assistant professor in the Department of Theatre, said there were always two performances, one at 9 p.m. and another at 10 p.m.

At the 9 p.m. performance, Donovan would play Macbeth.

“He would come to rehearsal with all of the students a couple times a week and just got right down into it,” Mackay said.

2014 was the last year for this performance, due to difficulties scheduling the 2015 season.

“Dr. Donovan all four years [I directed] was just great. It was great to know him that way, through a project of artistic nature.”

Lydia Mackay, assistant professor in the Department of Theatre

She said she would love for “Bard on the Rocks” to come back one day.

“Frog Henge is particularly important because with Dr. Donovan being a geologist and his love of the earth and rocks and all things nature,” Mackay said. “I think it was a special place to gather to do the show. That way, he could be there and talk to the audience after the show and thank them to coming and tell them the story of Frog Henge.”

Donovan doesn’t take credit for the sundial at the opposite end of the University Drive strip in front of the Walsh Center for the Performing Arts and next to Ed Landreth Hall.

“I told the chancellor that one of the nice things to have would be the sundial,” Donovan said. “And a donor turned up out of the blue.”

It was installed in honor of Jan O’Neill, an alumna.

“What I was involved was the game,” Donovan said. “Where do we put this sundial so the sun and shadows don’t interfere with it?”

He said that its location is the only place where it wouldn’t deal with tree and shadow issues.

Donovan said he did come up with the idea of the tree walk — a series of informational plaques placed near the trees leading to Sadler Hall.

He said he has always been impressed with how beautiful the trees are on TCU’s campus; however, they haven’t always been there forever.

“All the trees that you see have been planted over time,” Donovan said. “When people yell at us for cutting trees, destroying nature, we put the trees up in the first place.”

Some of the trees are common, while some are a little rarer. There is a number attached to each design and a description.

“The first generation of name plates didn’t survive the fraternities,” Donovan said. “The second generation appears to have stuck and are somewhat better than the first series of name plates.”

The oldest tree on campus is a Live Oak, close to Sadler Hall.

Donovan’s influence expands beyond outdoors. He has had a major say in academic buildings around campus, including Anne Richardson Bass Building and the Mary Couts Burnett Library.

June Koelker, library dean, said during the last round of renovations she and Donovan paid close attention to how the library would look. They considered everything from seating and stairs, to classroom connections.

They also had to ensure there would be room for every student who wanted to use the building.

“Students who are paying private school tuition should have a library with enough seats so they can find a place to sit down,” Koelker said.

The stairway enhances the idea of knowledge is power.

Donovan said the stairways were a “death trap.” They were replaced with a new set of stairs, consistently of the words “knowledge is power.” This saying is displayed in 24 different languages, which are the languages of the students who were at TCU in 2014.

Of all the buildings on campus, Donovan said he is proudest of Rees-Jones Hall because he placed his imagination into the building.

Rees-Jones Hall was created to be a state of the art building with flipped classrooms.

“If you go in Rees-Jones, there are lots of cleverly done graphs and stains on the wall. I got each of the colleges to give me a statement about freedom,” he said. “You find those as you walk around the building. It is supposed to make you think.”

Koelker said Donovan felt very strongly about the importance of education, knowledge is freedom and power.

The walkways between the library and Rees-Jones shows this.

“And then we tied it to the library by putting those walkways, what is called the bridges of imagination,” Donovan said. “As you go from knowledge is power to knowledge is freedom, you’re using your imagination. It is all highly symbolic.”

Many pieces of the furniture in the library and Rees-Jones Hall have outlets in it to recharge. Koelker said this is because technology is an important element in these academic buildings.

Up next for Donovan

After a yearlong sabbatical, Donovan plans to resume teaching in the geology department. His office will be two miles from campus off Granbury Road.

“I will be able to carry on doing research, I’ll get my microscopes in there, and be able to go back looking at problems I gave up 14 years ago when I started the journey [as provost].”

Koelker said his legacy will live on through the academic buildings, programs and research he has helped make an impact on.

Donovan said he’ll miss campus, but looks forward to many degrees of freedom.

“Looking back at it all, I’m proud of all of the things we have done.”

Chancellor Victor Boschini agrees that Donovan’s legacy will live on.

“I think that Dr. Donovan has had a huge impact on TCU during his 15 years as Provost… and during the many years beforehand when he was a professor,” he said. “That impact, consistent throughout his TCU career, is upon the hundreds of students he has influenced over the years. I have met many, many of his former students and they all concur that he was a ‘difference-maker’ in their lives. Perhaps that is the most meaningful impact anyone could ever have, in my humble opinion.”