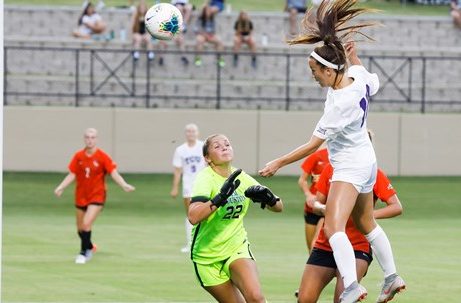 The Horned Frogs maintained control and dominated possession in both halves of the match.

Sophomore Messiah Bright and first-year student Gracie Brian scored two goals apiece while junior Yazmeen Ryan and sophomore Maddy Warren each scored a goal of their own in the win.

“We scored a lot of different ways so that is always a positive,” head coach Eric Bell said.

The Horned Frogs defense remained strong throughout, allowing only one shot on goal.

TCU struggled with offside penalties throughout the game, receiving eight calls compared to the Bearkats one.

“Good performance for the most part,” Bell said. “There were some pieces in the game where we should have been better and sharper, but overall I am happy with the performance.”

The home win brings the Horned Frogs to 2-1 on the young season. TCU has now won all five meetings in the series with the Bearkats.

Bell said the team is happy with the result of the game, but now the team is focusing on improving and getting prepared for Sunday’s match.

The Horned Frogs will travel across the metroplex Sunday to play No. 25 SMU. Kickoff is set for 7:00 p.m.