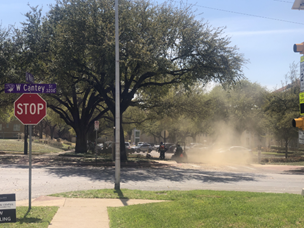 Students might be starting to experience irritated skin, sneezing, watery eyes and congestion, which means that allergy season is officially in full effect.

“Ragweed season can start as early as July and peak around early to mid-September,” said Stephanie Baldwin, the allergy nurse at the Brown-Lupton Health Center.

According to the Weather Channel, parts of the nation––from Arizona to the Carolinas––may be experiencing a bad allergy season.

Although TCU draws students from across the nation and the world, for those who’ve never experienced Texas’ climate, these allergy symptoms may be a shock.

Junior computer science major Nick Bell, of Chicago, said his allergies were the worst they have ever been since moving. Bell started taking allergy shots to combat his symptoms.

“Taking allergy shots has allowed me to breathe normally out of my nose for the first time since I was a kid,” Bell said. “It really makes a difference in your everyday routine.”

Baldwin said allergy shots are a viable way to calm allergies, but require a three to five year commitment.

Experiencing common allergies is still possible during ragweed season, Baldwin said. Pollen, dust mites and mold are three of the most common allergies, according to WebMD.

“Anyone can develop an allergy to a substance at any time in our lives,” Baldwin said. “We also can outgrow allergies as we get older. If the symptoms are bothersome and interfering with daily life, an allergist is the best person that can help with symptom relief.”

“Once a diagnosis is made and a treatment plan is in place, it’s important to stay compliant with treatment,” Baldwin said. “Be your own advocate for better health.”

Baldwin said a daily antihistamine, nasal sprays and washing the hair and body when the pollen count is high can be effective ways to calm allergies.