After ending last season with a losing streak, TCU women’s equestrian is set to kick off their spring season with a fresh attitude.

In the fall, the team went 6-4 and lost their last three meets. With the spring season kicking off against Delaware State this Thursday at the Fort Worth Stock Show and Rodeo, the team is looking forward to getting back into the swing of things.

Cydney Benes, a senior rider, is gearing up for one last ride with her team.

“I’m looking forward to getting back in the team spirit,” Benes said. “We all have so much fun cheering each other on.”

The team’s first meet of the season will be in a different environment than normal — TCU Day at the rodeo in Dickies Arena. This means fans are going to differ from a typical equestrian meet for the TCU team.

Drew Rogers, another senior on the equestrian team, is thrilled to experience this new crowd, especially since its made up of fellow Frogs.

Rogers said the TCU students will bring the energy for their first meet.

“We primarily have family and close friends come watch us, but we would love to have other students come and watch,” Benes said.

There is one twist to the meet: the girls won’t be riding their own horses.

“One thing that most people don’t know about our sport is that we only have four minutes to practice on the horse that we draw for the meet,” Benes said.

Rogers says this creates quite the challenge but it “makes it an equal playing field for both of the teams competing.”

Benes also believes this forces her and her teammates to rise to the occasion and shows how gifted they are.

“Having only four minutes shows that we are all very talented riders,” Benes said.

TCU competes at both 10 a.m. and 5 p.m. on Thursday at the Fort Worth Stock Show & Rodeo. The Frogs will take on Delaware State, a team they defeated 3-1 last April. 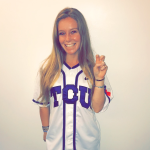