For high school seniors, college tours are a glimpse into the potential of their future full of freedom, development and fun. For TCU volleyball defensive specialist and libero Dani Dennison, a simple college tour took a turn for the unexpected.

During her senior year at Edison High School in Orange County, California, Dani Dennison and her mother took the cross-country trip to TCU.

Despite receiving All-Sunset League First Team Honors all four years of high school, winning an MVP trophy in 2016 and being a part of the Orange County Volleyball All-Star Team in 2017, Dennison never thought she would play at the collegiate level.

“I just didn’t think I was good enough,” Dennison said.

Now TCU’s all-time digs leader with 1,611, Dennison said she always knew she wanted to be a Horned Frog, but it wasn’t until her visit that she knew TCU was the place for her.

Expecting to walk through the Commons on her visit, she instead toured the Rickel in the University Recreation Center after her high school club volleyball coach put her in contact with the then-TCU volleyball head coach Jill Kramer.

“[Kramer] went out of her way to take me on a whole tour of the school,” said Dennison. “I could’ve sucked at volleyball and she took hours of her day to do that.”

That was what sold Dennison on the program during her visit.

“Jill [Kramer] was a big reason why I committed,” said Dennison. “She really, really got me out of my comfort zone and pushed me to be a better leader and I always trusted her.”

The two built a strong relationship from her first day at TCU.

“I just think that my leadership on and off the court has grown so much and a lot of that is because of Jill,” said Dennison.

Kramer recognized Dennison for her growth not only as a player, but a person, something she can take with her beyond her volleyball career.

Despite TCU’s tough run over her five years and a group of her teammates transferring to other schools, Dennison stayed true to the place she called home.

“You see these other people leave, you know, Elan [McCall] at UCLA and Tori [Dilfer] as Louisville’s setter of the year two times in a row, and I think that’s great,” said Dennison.” I think they’re exactly where they belong, but I found a home here, and I wasn’t going to leave.”

Dennison said that from a young age, she knew that loyalty was an important factor to her family.

“My parents are very passionate and very committed and talk about loyalty a lot,” said Dennison. “Once I commit to something, I’m not going to give up on it. I came here and I committed to TCU and I was going to stick it out. I would never leave my teammates behind and I wouldn’t leave my coaching staff behind. Especially with how much time and effort they put into me.”

While it was bittersweet watching her teammates move on to different programs, Dennison said she was thankful to have ended her career with TCU under Kramer.

Taking her commitment and loyalty to the next level, Dennison was planning on becoming a graduate assistant for TCU volleyball in 2021 when the news broke about an extra year of eligibility due to COVID-19.

As the COVID-19 pandemic spread around the globe, leading to a bizarre 2020 season, players of fall and winter sports in all divisions were granted an extra year of eligibility.

“As soon as [Kramer] called me and was like, ‘You need to plan to play next year,’ I was like ‘Sold! You don’t have to tell me twice’,” said Dennison. “It was an easy decision. I love volleyball, I love this program and I’m glad I stayed because I got really close to the girls on the team.”

In that 2020 season, Dennison had become the first Horned Frog to lead the team in digs over three separate seasons, finishing with a team-best 287 digs.

Dennison placed 11th in the nation in career digs among the Power 5 Conferences while also getting her master’s degree in business analytics.

Dennison said she wouldn’t have done it without her support system and her teammates.

“Most of those records go towards my teammates. I wouldn’t be getting those digs without my blockers up there or my attackers getting the point,” said Dennison. “So, all power to them.”

The TCU star will go down as one of the greatest volleyball players in TCU history, but volleyball is not in her future, Dennison said, as she wants to end her career on a high note.

When asked about her time at TCU, Dennison said she has learned a lot about herself, including her passion for the things she loves and is excited to take that with her into the workforce.

Dennison said she is going to miss her teammates the most.

“The relationships I have are so unmatched and I’m so thankful that Jill gave me another year to play with everyone,” said Dennison. “I wouldn’t change anything. I absolutely love TCU. I absolutely love TCU Volleyball, and I know that they’re going to do great things, and I wish them all the best of luck.” 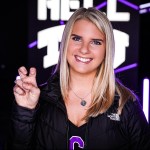