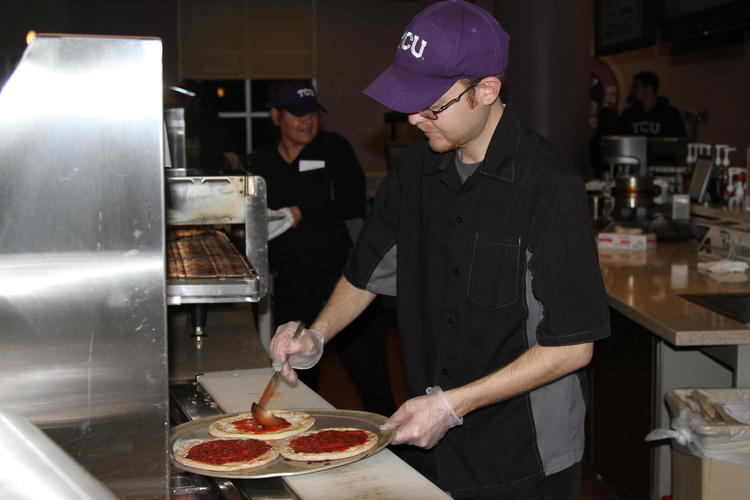 Starting at 8 p.m. Sunday through Thursday, Union Grounds will switch to making pizzas instead of sandwiches, Sonia Hernandez, the retail manager for Sodexo, said.

The idea and its implementation were an initiative of the TCU Dining Committee.

Daniel Walsh, a sophomore business major, said he would like to see the pizza served throughout the day as well as having it available on Fridays.

Ordering the pizza works the same way as ordering ice cream and sandwiches in Union Grounds.

Sonia Hernandez, the retail manager for Sodexo, said the pizza is different from Market Square pizza and takes about three to five minutes to make. Student reactions to the new offering have been positive so far, Hernandez said.

“They come and try to get pizza early. So they’ll stand around and wait for us to set up pizza,” she said.

Billy Drake, a first-year geology and sociology double major, said he likes how Union Grounds is changing things up, but would like to see sandwiches being made at the same time as the pizza.

Trent Becan, a prep cook in Union Grounds, said the pizza is selling well so far.

“The students seem to really like it. We’ve been slammed today,” Becan said.

Union Grounds is located on the first floor of the Brown-Lupton University Union.