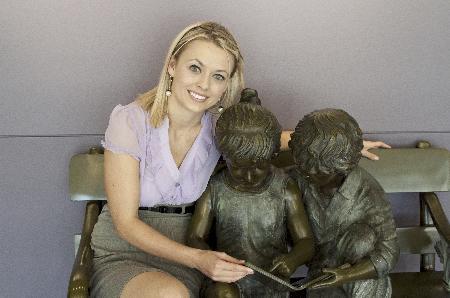 Becky Robbins said she could not wait to see the kids who gave her pneumonia this spring. Her passion for teaching youngsters combined with her desire to return to her wedding place in New York and her previous experience winning a high-profile contest encouraged her to enter in the Victoria’s Secret “Love Your Body by Victoria” contest. The contest allows a person to submit four photos of themselves and a short paragraph detailing why and what they love about their body.

Robbins, a senior early childhood education major, said she loves her body because it allows her to do what she loves: teach.

In the spring semester, Robbins had an internship with M.L. Phillips Elementary School in Fort Worth and caught pneumonia while teaching in a kindergarten class.

Beverly Gavrel, the kindergarten teacher, called Robbins while she was in the hospital on a school day with a surprise: giggling kids who sent her greetings from across the line.

“Just to hear their voices, you know, I knew this is what I wanted to do in life,” Robbins said.

Robbins was in the hospital for five days, which she wrote was a nightmarish experience. Robbins, who said she was asthmatic, was more susceptible to pneumonia due to her exposure in the elementary school and the already-fragile condition of her lungs . Her blood pressure dropped significantly below the average 120/80, and she was unable to receive pain medication until it had reached stable levels. She said she had a fever of 104 or 105 degrees Fahrenheit and was constantly being stuck with needles.

It was from Gavrel’s phone call that Robbins said she regained her spirit to go back to the school to teach. Robbins said that without her body, she would not physically be capable of going into the classroom and doing what she loved. It was this experience that reconfirmed her passion for teaching children – the same passion she said she wanted to convey in the Victoria’s Secret contest.

So why did Robbins enter in such a competition? The answer to that question was almost another story altogether.

In January of this year, Robbins married high school sweetheart Amadeus Robbins in front of thousands in New York City on the nationally-aired MTV show “Engaged and Underage.” The couple was one of four chosen to wed in the MTV Bridal Bowl. Seventeen Magazine picked up the story in its April issue, focusing on the seven-year span of their relationship and the hardships and controversy they faced as a young, interracial couple.

Robbins said she entered MTV’s competition without expecting to win. But win the couple did, and capitalizing on the opportunity they took an all-expenses paid trip to the Big Apple, tying the knot in front of thousands.

It was this first click of fortune that Robbins said made her think it was possible to enter and win the “Love Your Body by Victoria” contest, which she found the link for while on MTV’s Web site.

Two winners are possible in the contest. The person with the most votes wins an all-expenses paid trip for two to New York City, which Robbins said was another reason she entered the contest, so she could take her husband back to where their nuptial experience began.

The second winner, according to the Web site, will be chosen by the judges out of the top 50 “most loved” contestants.

A quick look at the “most loved” spots and other pictures in general shows a trend of scantily-clad women in their contest submissions.

Megan O’Brien, the head of the Women’s Network on campus, said she thought one reason why photos were such a large part of the Victoria’s Secret contest was because contemporary society is very visual.

“It’s an interesting conundrum because I think the TCU student who posted her ‘Why I Love My Body’ blurb is going in the right direction,” O’Brien said.

O’Brien said Victoria’s Secret might have been trying to generate more positive public relations through the contest, since in the past she said the company had experienced criticism about the projection of the female body image.

Kelsey Latimer, a counselor with the Counseling, Testing and Mental Health Center also commented on the contest and the importance of body image.

“When I see people in here that don’t like their bodies, it translates into other things in their lives that’s usually not about the body,” Latimer said.

That self-image would influence whether a person would enter such a contest, and how they would portray themselves, Latimer said.

“In our culture, we are supposed to look a certain way,” Latimer said. “We are told a lot as women as to what to do and look like, and it promotes a lot of negative body image of the sense of self.”

One of the four photos under Robbins’ entry showed her in a bikini lying sideways on a beach. Robbins said that although she loved her body for its ability to teach, the contest is still a visual competition.

“I know I’m an attractive person; like I said, everybody’s a little attractive, but you’ve got to realize that I feel this way inside,” Robbins said. “I’m the one who knows myself the most. I’m the one who entered the contest. I didn’t have somebody else enter it for me.”

But it’s not all about looks, she said.

“What I’m saying is to look at your body – to yes, be healthy – take care of yourself, have that concept of good self-image, but also think about the other sides of your body as what they allow you to do,” Robbins said. “My entire body, both inside and out, allows me to get my job done and teach. Hopefully if I do win, that will come across and people will be inspired by that, to think more about that aspect.”

According to the contest’s Web site, www.bodybyvictoria.com, the contest was closed early because of tampering, but Victoria’s Secret will still award two prizes based on modified award criteria in accordance with the official rules.