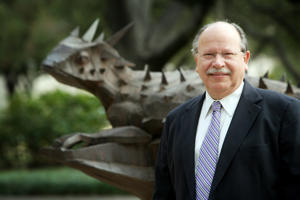 After 17 years in an executive position at the university, Vice Chancellor for Student Affairs Don Mills will soon take on a new role.

Mills will serve as Distinguished Professor of Educational Leadership in the College of Education, a title reserved for professors with an extensive amount of experience, he said. Mills said he will teach a full course load in the fall of 2011.

Mills said he considered the career change for several months before making an official decision. He said he grew interested in the long-term direction the College of Education was taking and how students would be educated in college administration.

After conversations with the dean of the College of Education about strengthening its higher education program, Mills said he decided his interests would be best served as a professor.

“It was just a great opportunity to do something a little bit different, and I thought I could contribute,” Mills said.

Mary Patton, dean of the College of Education, said she was eager to welcome Mills to the program as an educator. Mills currently teaches a graduate course called Organization and Administration of Support Programs, she said.

“We had been wanting to start this doctoral program in higher education, but we didn’t have a faculty person to start the program, and he was interested,” Patton said. “It’s just a win&-win for us.”

Mills said he looked forward to being part of the energy that comes from being in a classroom setting.

“I love teaching,” he said. “I like the interaction, the challenges that come in helping people grow.”

The change in position would afford him more time to conduct research and write, he said. Mills said he wanted to research higher education in relation to several areas, including the economy, international studies and the millennial generation’s attitudes concerning higher education.

Mills said he would miss his daily interaction with other administration members and being able to make decisions at the policy level.

A selection committee chaired by Provost Nowell Donovan will determine who will fill the vice chancellor for Student Affairs position by June 1, at which time the replacement would assume the duties of the role, he said.

Members of the selection committee have not been announced.

Mills, who will not be directly involved with the selection committee, said he would help mentor his replacement by answering questions and explaining the responsibilities of the position.