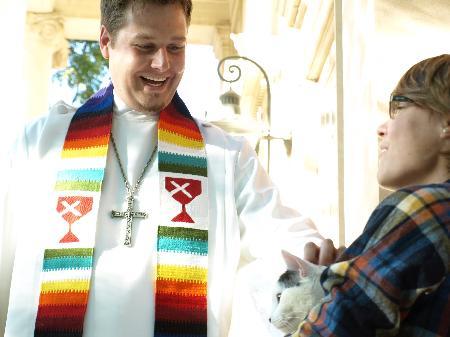 The university will not hold the annual Blessing of the Animals service this year because of safety issues and low attendance in recent years, a university official said.

The Office of Religious and Spiritual Life held the ceremony every October to coincide with the peace day celebration of St. Francis of Assisi, the patron saint of animals and the environment, associate chaplain Jeremy Albers said.

“The Blessing of the Animals is a way to acknowledge God’s creation and the relationship humans have with that creation,” Albers said.

Neither the dog nor any drivers were injured, but Albers said safety would be a key concern in the future.

“After last year, we figured in order to offer a Blessing of the Animals service we want to make sure that it’s safe for not just the people attending but also the animals as well,” he said.

Albers also cited a “significant decline” in attendance in recent years as another reason for not holding the ceremony this year. The department plans to bring the service back next year away from streets and plans to move it to the Brite Divinity School when renovations finish.

“It always depends on what the students want,” Albers said. “But I’m hoping they bring it back. It’s one of my favorite services.”

The university postponed ground breaking for Brite’s renovation, but Albers said it should begin in the coming months. Completion of the construction would take about 18 months.

Last fall, Brite disclosed plans to renovate the Moore Building, where it is currently housed, as well as construction of the Nell A. and W. Oliver Harrison Building, which would replace the portable offices in the parking lot behind Beasley Hall.

Senior film-television-digital media major Caitlin Cecil said holding a blessing service at TCU would be a good opportunity for her and her dog Lilah to get out of the house in the future.

“I don’t know a lot about it, but if it seemed like something fun outdoors for my dog to get some exercise, I would definitely attend,” Cecil said.

Sharyn Peterson, ministry assistant at University Christian Church, said the church will hold a Blessing of the Animals service Sunday.

The church plans to give the offerings from the blessing service, including any blankets, towels and dry dog food, to a local animal shelter as part of its animal outreach mission, Peterson said.

“They’re God’s creatures too,” Peterson said. “And because of the overwhelming number of animals being dumped because of the economy, we just thought we needed to try to help.”

Albers said students can contact the Office of Religious and Spiritual Life for information on other services held around the area.

What: Blessing of the Animals service