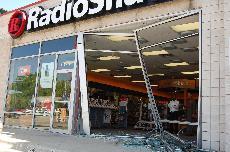 Prepaid phone cards and shattered glass covered the entryway of the RadioShack near campus after a man drove a car through the storefront Wednesday.

At about noon, a man driving a gold Chevrolet Impala accidentally hit the gas pedal instead of the brake and drove his car into the front of the RadioShack at 3107 Greene Ave. and Berry Street from his parking place, said Officer Rodney Jones of the Fort Worth Police Department.

Along with the driver were two passengers, one in the front seat and one in the back seat, none of who suffered injuries.

Several people witnessed the accident while eating lunch across the street at Which Wich.

“We were sitting here having lunch and an older man in an Impala drove through that window,” Elliot Young, a senior political science major, said. “He was parked there, and the next thing we know the car was through the window.”

RadioShack store manager Aldon Gaston was the only person inside the store at the time of the accident. He said the first thing he saw after a loud crash was the front of the car in the store.

“I was doing something on the computer, and it happened just that fast,” Gaston said. “Within seconds they just ran into the store.”

RadioShack district manager Tim Slife said no merchandise was damaged in the accident.

The entire right window of store was shattered in the accident, bending much of the front frame of the store. The car’s front grill was bent in, and the windshield was cracked but remained in one piece. The left rearview mirror of the car was also damaged.

Within 30 minutes of the accident, a glass repair truck arrived to clean up the damage to the store. Slife said the store would be cleaned up and repaired by the end of Wednesday.