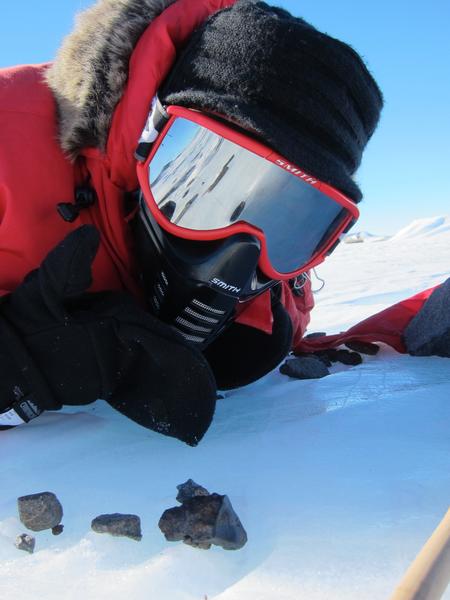 For the TCU community, February’s five days of snow meant cancellation of school and inability to drive on slightly iced over roads, but for Rhiannon Mayne, a little bit of snow was nothing after spending eight weeks in Antarctica.

The National Science Foundation sponsored the Antarctic Search For Meteorites, which included training at a research center and flying the researchers to an area known to be rich with meteorites for six weeks, she said.

From late November to late January, Mayne and seven team members set out each morning on snowmobiles in hopes of discovering meteorites that would be easy to see, she said. However, the team of eight found a total of 900 meteorites by the end of the trip.

Mayne said the NSF provided the team with physical essentials; however, they did not equip her for the type of lifestyle change she would face. Nor did anyone else. She lived on a sheet of ice in a two-person tent heated by a propane stove, had a once-a-week sponge bath and had a satellite phone to make five-minute calls.

“It does give you an appreciation for the small things in life,” she said. “We didn’t have running water. If you wanted a drink, you would have to chip the ice and melt it.”

After working with Antarctic meteorites as a graduate student at University of Tennessee-Knoxville, Mayne attended the Lunar and Planetary Science Conference where she discovered the meteorite search program, she said. After the conference, she decided to begin the application process for the trip, which took her years to finish. She said she was chosen to participate because of her knowledge on meteorites.

Mayne said she wanted to contrast her past experience classifying meteorites at the Smithsonian Institution by actually going to Antarctica to collect them. The meteorites collected during the recent NSF program are in the classification process at the Institution, she said.

“The reason the U.S. Antarctic program is so important is because we’re all volunteers and when we come back we have no priority to study what we found,” she said. “Any scientist can apply to work on it. That’s what makes the U.S. program different.

“It’s a great program and my graduate student has just as much [of] a chance to apply to study a rock as I do,” she said. “It’s an open field for everyone to study.”

Second-year graduate student Ben Herrmann is currently one of Mayne’s thesis advisees and first had her as a professor last spring. Herrmann said Mayne has made a large impact on his current area of study within the School of Geology.

“I hardly knew anything about meteorites before taking her class,” Herrmann said. “That class taught me so much about meteorites that it made me interested in the topic and gave me more of a desire to pursue work of that nature. She is essentially my only inspiration I have for that at all.”

Ken Morgan, director of the School of Geology, Energy, and the Environment,, said he greatly appreciated Mayne and the asset she has become to the TCU community. She brought her knowledge from her previous position at the Smithsonian Institution to advance the Oscar E. Monnig Meteorite Gallery located in the Sid W. Richardson Building.

“She is a top-level teacher, top-level researcher, loves meteorites and is very dedicated to making this collection even greater,” Morgan said. “That’s why she would go so far away to help with it.”

Mayne said many of the people she has shared her story with have expressed an interest in getting involved in a program like the Antarctic Search for Meteorites. Next week, Mayne said she plans to meet with those interested to discuss her trip and how students can become involved.