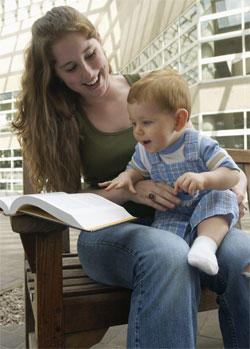 Mike Russel, associate dean of Campus Life, said he deals with approximately one or two cases a year, which is not enough to require a program to help pregnant students.

Bethany Shields, a senior chemistry major, was pregnant during the spring 2004 semester.

She did not attend the fall 2004 semester, because she did not want people to stare.

“I consider myself a strong person, but I still did not want to deal with people looking at me and judging me,” Shields said.

After having her son, Cameron, Shields returned for the spring 2005 semester, but she had to drop her classes because of an illness in her family.

Shields should have graduated in May 2005, but she now needs extra semesters to graduate because she missed a year. Currently, she is taking 10 hours.

“(Chemistry) can be quite demanding, so I am not taking a full class load,” she said.

When Shields first learned that she was pregnant, she was worried about what was going to happen and afraid that she had thrown her life away. But she said that she is happy to have her life the way it is with her son and husband.

To pregnant students, she said, “Four or five months of a big stomach is nothing compared to the life they will have with their child.”

Christopher Alt Jr., a senior entrepreneurial management major, knows how difficult it is to have children while in college.

Alt is a full-time student and a father of three: Bailyn, 4, Savana, 2, and Regan, 9 months. Alt works full time as a business development specialist at Alt Benefit Consultants. His wife, Sara, does not work and stays home with their children.

“She has empowered me with the opportunity to pursue my dreams,” Alt said of his wife.

Despite the difficulties of being a full-time dad and student, Alt continues because he views his family as an inspiration.

Though some students are not forthcoming about their pregnancies, Michelle Clark, an adjunct professor of journalism, said it should not be taboo for a student to be pregnant. Clark is continuing to teach while she is pregnant.

“The way I look at it is, why not?” Clark said. “My job offers no occupational hazards to my health or my baby’s, and I enjoy it very much.”

Giles-Sims said it is beneficial for students to see faculty pregnancies.

“It is good for students to see real family issues handled well at work,” Giles-Sims said. “It provides models for their later lives.”

Giles-Sims said pregnant women are sometimes treated differently because their peers assume that they will not continue their careers or studies.

Though there are no formal accommodations for pregnant students, some might be negotiated with faculty members, Green said.

“I suppose there aren’t that many students who are pregnant to demand an official policy, though I don’t know the figures,” Green said.

Russel said that what a parent needs most is time, and stopping at a support group would take up too much time.

“The biggest sacrifice I have given in exchange for my education is my time,” Alt said, “I can never get this time back.”

Shields said an on-campus day care would help students and faculty with children.

“It would make me feel a lot better knowing that if anything happened to Cameron, he’d be close to me,” Shields said

Russel said TCU officials have talked about a day care center for several years, but nothing was ever made official.