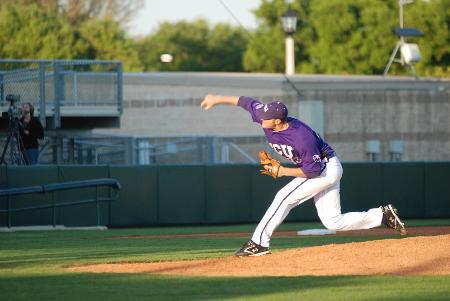 The No. 28 TCU baseball team will begin a nine-game home stint when the team faces the No. 23 Oklahoma Sooners on Tuesday night. The Horned Frogs are looking to avenge a 13-5 road loss to the Sooners. The loss was the only blemish on the Frogs’ recent seven-game road trip.

The Frogs went 6-1 on the road, including two conference sweeps of the Air Force Falcons and the UNLV Rebels.

At the plate, the Frogs have been led by seniors Austin Adams, Keith Conlon and Steven Trout. Conlon leads the team and is second in the Mountain West with a .391 batting average. Trout and Adams are also in the top 10 in the MWC with batting averages of .355 and .343, respectively.

Strong showings by juniors Andrew Walker and Clint Arnold have also helped the Frogs offense score 55 runs in the past seven games. Arnold was named MWC Hitter of the Week, after hitting two home runs and three doubles. He also drove in nine runs and scored six times last week.

The Frogs will face a Sooner pitching staff that is the third best in the Big XII. The Sooners hold a 3.67 ERA through 38 games. The staff has also had 312 strike outs in 336 innings pitched.

The Frogs pitching staff has been less than stellar, posting a MWC third best ERA of 4.40, but they are facing a Sooner team that holds a .254 team batting average. Frogs opponents scored an average of 7.33 runs a game in their past seven home games.

The Sooners have gone 3-4 in the last seven games, recently losing the last two home games to the Nebraska Cornhuskers.

Leading the Sooners at the plate is junior Joe Dunigan, who owns a .349 batting average. As a team, the Sooners have struggled to get extra-base hits with only 17 doubles, two triples and four home runs on the season.

The first pitch is scheduled for 6:30 p.m. at Lupton Stadium.