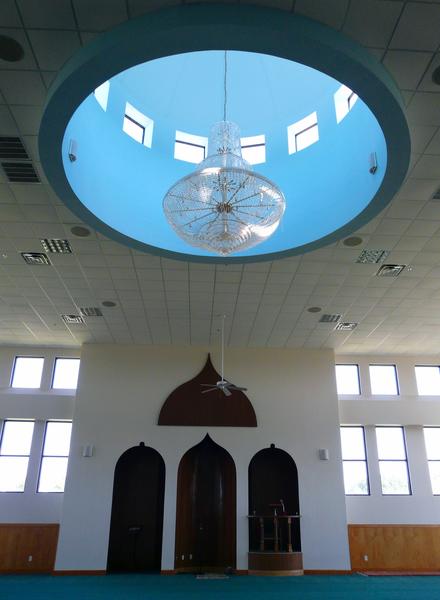 Inside his office in Beasley Hall, Yushau Sodiq’s voice resonates off of book-lined walls as he talks about the need for greater religious tolerance and equality in America. There appear to be thousands of texts, but the professor of Islam and African traditional religions has lost count of the mostly Arabic and Islamic literature that encompasses half the room.

Sodiq has lived and studied all over the world and he has experienced the best and the worst of religious tolerance. Born and raised in a small Nigerian village, his community didn’t even have electricity until he was 10 years old. His family encouraged him to pursue his education, and after attending Islamic high school in Saudi Arabia, he stayed in the country and earned a master’s degree in Islamic law from Islamic University in Medina.

He came to America more than 20 years ago to study religion. After earning his PhD in religious studies from Temple University in Philadelphia, he began teaching at TCU. He has been at the university since 1992.

As a Muslim in America, Sodiq knows about stereotypes and misunderstanding. September 11, Sodiq said, was a huge setback to the Muslim community. The biggest problem being that many individuals are uneducated about Islam. He attributes this, in part, to the fact that many Muslims are not active in the community.

Most try to keep a low profile, hiding to avoid confrontation, he said.

“They mostly see us on TV shooting and killing; that is not us,” Sodiq said. “There is another face to that.”

The Muslim community was in the spotlight again as plans were revealed for an Islamic center near Ground Zero. Sodiq said he hoped the United States would use this opportunity to send a message of harmony. But, unfortunately that was not the case.

“Everyone should be able to practice his or her religion where ever.” Sodiq said. “To label those who we do not agree with as “others’ is just unacceptable to me.”

The backlash hit close to home for Sodiq when during the month of Ramadan, the Islamic month of fasting, a slab of raw pork was left at the entrance of his mosque.

At a mosque in Arlington that same week, someone set fire to the playground. That type of hate doesn’t factor into Sodiq’s belief system.

“All you have to do is learn how to tolerate one another and live together peacefully,” he said. “It’s easy.”

A LIFETIME OF LEARNING

Like many young men in his homeland, Sodiq spent his childhood free time playing soccer in the lush open fields around his village. At night, he gathered with the other villagers for stories around the fire.

At an age when most American children are learning basic arithmetic, he was splitting his days between elementary and Arabic school. He spent most of his youth with his studies and was encouraged by his father to travel to Saudi Arabia and study at Islamic school as a teenager. Adjusting to western culture he said an educational experience of its own, and a little bewildering at times.

In Nigeria, he said, respect for elders is emphasized and it is customary to stand when an elder gentlemen enters the room and shake his hand. When he first arrived in the United States he would always do so, and was often met with a distrustful look.

But despite the adjustment period, Sodiq said he was happy to be living in a country with immense educational resources, a seemingly endless supply of books and well-equipped learning facilities.

Sodiq said most students don’t realize the number of students, facuty and staff who share his faith. “I ask, “Do you think there are Muslims at TCU?’ and they say no,” he said.

Each semester he requires his freshman level classes to attend the religious service of another faith. The students visit synagogues, mosques and temples.

Sodiq said he often faces criticism for this project, having been accused of trying to convert his students into Muslims and reported by students for requiring their participation. Despite this, however, it remains on his syllabus.

“I just want them to expose to something that they do not know about,” he said. “I believe if people know about Islam, they will respect Islam.”

Fidaa Elaydi, a senior sociology and political science double major said he was impressed by the real life experience Sodiq brings to the classroom from the time he spent in different parts of the world.

“The greatest thing Dr. Sodiq taught me is to be understanding and open-minded when studying religion 8212; especially the religion of others,” Elaydi said.

Sodiq remembers a time on campus when he came across a group who appeared to be lost. He said he told the group he worked at the university and offered his assistance, but because he was dressed in traditional Islamic clothing the group doubted him. It was not until he offered to show them his office that they relented and apologized, he said.

Instead of making him bitter, Sodiq said incidents like these have prompted him to extend his hand to others, with the hope that one day religious intolerance will cease.

“The community is what you put into it,” Sodiq said. And that is why Sodiq has opened lines of communication with other religious organizations in the community, welcoming them to visit the Islamic Association of Tarrant County. He has visited other houses of worship to educate their members on Islam and religious tolerance.

Dr. Nizam Peerwani, chief medical examiner for Tarrant County, and friend of Sodiqs has served with him on a number of committees at their mosque. He said Sodiq helps to promote a positive image of Islam by being moderate in his approach and tolerant of other faiths and persuasions.

“I have come to find him sincere, honest and caring,” Peerwani said. “He is almost always there to promote anything that will help a family or the community.”

There is a consensus among his colleagues in the religion department that Sodiq brings more to the program than just a wealth of knowledge. He brings a greater understanding of what it means to be an interfaith community.

“He’s priceless,” religion professor Darren Middleton said. “He has always been at the forefront of interfaith dialogue and cooperation. You really do get what you see, something heartfelt, something genuine.”

Sodiq invited the entire religion department to his son’s wedding. Middleton, who attended the celebration, described the event as a wonderful mix of African and Islamic influences.

Mark Dennis, religion professor, has worked closely with Sodiq planning conferences on deconstructing the terroristic view of Islam. He said he has been impressed by the kindness and intelligence he sees in his colleague. In academia, Dennis said, there can be competition. Sodiq, however, has been very interested in helping the younger professor succeed, he says. “He’s become a close mentor and friend,” he said.