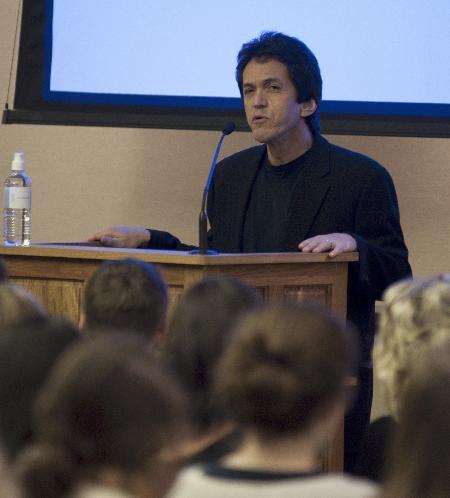 Best-selling author Mitch Albom told university students and faculty that they should just have a little faith even in times of uncertainty.

Albom, the author of 11 books, spoke about his recently released novel “Have a Little Faith” and his relationship with his faith to a packed crowd at the Kelly Alumni Center on Thursday night. Albom’s “Tuesdays with Morrie” topped the New York Times’ best-seller list for four straight years.

At the beginning of the speech Albom told the audience that he was not a religious man, even avoiding his rabbi at a young age.

Albom viewed his rabbi not as an individual but rather a religious authority figure.

As he grew older Albom said his ideas about his relationship with his faith changed. The Rabbi even asked Albom to read his eulogy at the time of his death.

Albom’s new book “Have a Little Faith” is about two different men, a rabbi and an ex-convict turned Christian pastor who met challenges while holding onto their faith.

The pastor was a drug dealer involved in crime and eventually turned to using the same drugs he was selling.

The man continued a destructive lifestyle of drugs and crime, which made him a lot of money until he hit rock bottom and ended up robbing his drug dealers.

After realizing that the dealers knew where he lived, he became aware that his life and his family’s lives were in danger.

He then asked God to spare his life and that of his family, and through this experience he is now able to share the word of God with others.

Albom said that the story of the rabbi and the pastor show how faiths can get along in harmony.

“I would hope people would take away from that talk that we are more alike than different, and if we just look at our faith as something that could unite us rather than saying, ‘Oh, you’re not exactly the same as me so you must be the enemy because I can only be around people like me,'” Albom said.

Nicole Garrison, a sophomore strategic communication major who attended the event, said the speech was relatable to the times we live in.

“I really liked how he compared all the religions but we’re all connected with the faith,” Garrison said.

Matt Dietrichson, representative for SGA, said the topic of faith is not an easy topic to talk about but that he liked Albom’s ideas about faith.

“He kind of focused on an all inclusive approach to faith,” Dietrichson said.

Keri Cyr, communications coordinator for Student Development Services, said having Albom speak for the “One Book, One TCU” program was a compliment to the values campaign at the university.

Kelsie Johnson, student body president, said the One Book program has been a success and that SGA is planning more in the future.

Albom has also been involved in helping community homeless shelters.

One cause in particular was discovered on the way to a baseball game where members of a church were sleeping by snow-covered pews due to a hole in the roof.

Ten percent of the proceeds from his latest book will go to repair the hole in the roof of the Detroit church.

“You have to have a little faith and maybe we will figure it out ourselves,” Albom said.