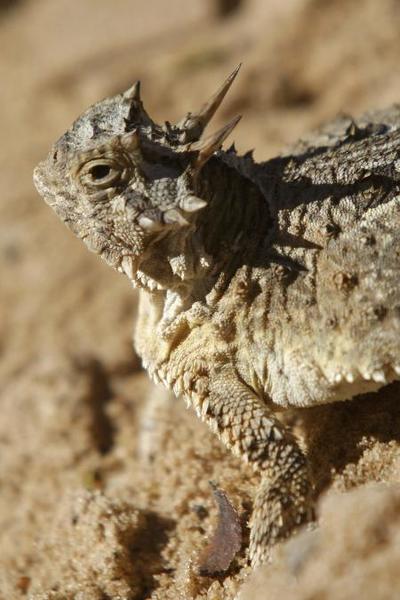 The fate of the Texas horned lizard might rest in its DNA.

Biology department faculty members Amanda Hale and Dean Williams said they plan to use horned lizard DNA samples from across the state to generate DNA fingerprints and form patterns mapping their population structures.

The Texas horned lizard used to roam freely on campus, but since the 1980s, there has been a decrease in sightings, Hale said. It has been on the Texas Parks and Wildlife Department threatened list since 1967, according to the organization’s Web site.

Leach helped with gathering horned lizard field samples and in the lab.

Factors of the horned lizard population decline pointed out by Hale, Williams and the members of the Texas Horned Lizard Watch program include collection for pet trade, habitat loss, climate change, spread of the imported red fire ant and environmental contaminants.

Answering questions like these will give biologists a better idea of how to draft a plan to reintroduce horned lizards to places where they have disappeared, Hale said.

Williams said the genetic work creates a map of how the horned lizards move across the landscape.

Understanding horned lizard movements and their DNA can determine whether or not lizards located in different parts of the state may be used to repopulate areas where they have disappeared or become endangered, Williams said. It enables conservationists to make informed decisions on which populations would be more conducive for restocking the varied areas of the state, Williams said.

“We can detect whether populations have crashed recently, and if they have very low genetic diversity, you wouldn’t want to use those populations as restocking sources,” Williams said.

Williams said in order to amass sufficient samples for their DNA work, they have paired with Texas Parks and Wildlife Department training volunteers to gather the needed cell samples. A kit sent to volunteers includes such tools as a guitar pick to pry open the mouth and swabs for cell samples.

Leach said that upon arriving at the lab, DNA is extracted from the samples, and stored and refrigerated in small tubes until the biologists run them through a thermal cycler, a machine which uses varied temperatures to amplify and multiply the DNA.

“The thermal cycler does a polymerase chain reaction, which amplifies the DNA to a really high concentration level, allowing us to work with it,” said Leach.

The machine allows researchers to generate millions of copies of a single DNA sequence, Leach said.

With a wide sample range and the ability to collect and observe the DNA data, the scientists can verify several factors which will help to illuminate causes of the decline and the possibilities for repopulation, Leach said.

The biologists currently await more samples which should be ushered in as the summer arrives and horned lizards emerge from hibernation, Williams said.