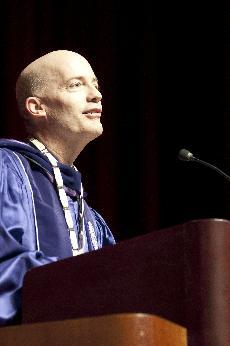 This year’s convocation had a different tone than most.

“Spread the love, I’m going back to the sixties,” said Chancellor Victor Boschini as he commenced Fall Convocation where he discussed how the economic downturn has been affecting the university and its plans to move forward strategically and remain on solid financial grounds.

Boschini began the event by welcoming the class of 2013.

The university’s endowment fared much better than many others, but even it could not escape the economic situation unscathed, Boschini said. He then went on to talk about how other institutions and the university have taken measures to confront the economic downturn.

“The larger the share of the annual budget provided by the endowment, the more profound the negative impact,” Boschini said. “At TCU that figure is 16 percent, but many other schools are much more dependent upon their endowment income to balance their budgets. Virtually all schools are looking at cutbacks in some areas.”

“We are being carried forward on the shoulders of those who have gone before us, those who have made wise, conservative and prudent financial choices in the past,” he said. “TCU’s administration began making adjustments long before the market and economy hit bottom, including cost reductions throughout the university.”

Boschini said the board of trustees agreed to keep the endowment constant and that they wanted to keep using the momentum that the university has built.

“What we’re basically saying is that we’re ensuring the future of this university,” he said. “We’re continuing to build our budget on our more modest number – not the number of new students … We’ll have them for four years, but I don’t want to get addicted to the income they’ll bring in.”