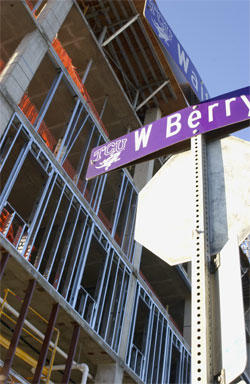 Chancellor Victor Boschini’s announcement of a $100 million construction plan last week has gained much attention among the TCU community.The proposal, which includes the addition of four residence halls, a new university union, and the renovation and expansion of the School of Education, are all part of Boschini’s Vision In Action plan.

VIA’s main goal is to help further TCU as a university and improve the quality of the school for everyone, Boschini said.

The campus renovations have also received much attention from other administrative members.

“I am very excited about the construction that is going to take place,” said Don Mills, vice chancellor for student affairs. “The new student union and large space in the center will create a great crossroads and gathering area for students and faculty alike.”

Senior marketing major Travis Lenander said he was impressed with the new developments in place.

“I think the new student center will be a great addition to the campus,” Lenander said. “I think all of the renovations are very necessary, but I am not looking forward to all the construction problems.

Boschini said the first real signs of progress and construction will become apparent late in the summer of 2006, but students will not be able to use the buildings until the end of 2007.

“Students will see new buildings approximately 14 to 18 months after construction begins,” Boschini said. “The construction is substantial, but we are excited and going to try to be as accommodating to students at possible.”

Mills said he agrees that the construction, which is going to take place mostly in the center of campus, may cause some traffic problems.

“We are definitely going to have redirect both pedestrian and car traffic,” Mills said. “There will be considerable disruption, but we are going to keep students as involved possible.”

Mills added that students will be able to track the constructions progress on the TCU Web site.

“I am very happy that the education building is finally getting some attention,” she said. “I have spent three years in the current building and feel that it is about time we put time and money into that building that is often overlooked.”

The reconstruction and renovation of the campus are only part of VIA’s comprehensive plan for TCU, Boschini said.

“VIA’s plan is only going to improve on what TCU already has,” Mills said. “The construction is going to create more multi-purpose areas on campus, and the renovations are greatly needed.”

Townsend said she agreed with Mills that the proposal will really benefit students and faculty.

“I think the renovations are great,” Townsend said. “I just wish I would be here to see the improvements.