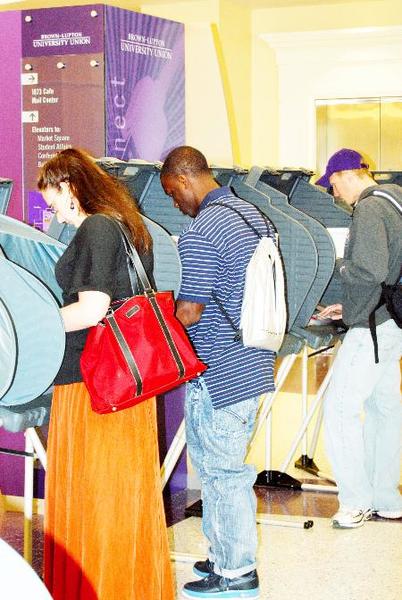 More college students are casting ballots in the early voting elections than in the previous presidential election, an early voting official said.

Rena Brown, an early voting clerk stationed at the Brown-Lupton University Union who also worked as a clerk at TCU during the 2004 election, said having an early voting station on campus increases the number of students who vote because they can stop by to vote on the way to class or while getting something to eat as opposed to standing in long lines somewhere off campus,

After the early voting polls closed on Tuesday, 314,099 of the 940,000 registered voters in Tarrant County had voted since the polls opened Oct. 20, Brown said.

According to the Tarrant County Elections Web site, 307,246 voters casted ballots early for the 2004 presidential election.

Early voting at TCU, which opened Monday morning at 7 a.m., drew in 622 voters by the time the polls closed at 7 p.m.

“The first day a location opens is always busy because it has been heavily advertised, but Tuesday and Wednesday tend to be slower,” Brown said. “Thursday and Friday will get busier again because more news reports are being done and it will be the last two days to vote early,” she said.

However, Tuesday and Wednesday voter figures increased to 1,426 total voters as of Wednesday at 5:30 p.m., Brown said.

Brian Kym, a senior finance major who voted early, said he enjoyed how easy it was to be able to vote on campus.

“It was very convenient being able to vote here while I was getting food and meeting up with some friends,” Kym said.

Kym said he still would have voted if early voting wouldn’t have been available at the university, but he would have waited for the actual election day and would have hated having to deal with the long lines at Paschal High School.

Early voting locations are open at 7 a.m. and close at 7 p.m., but voters who are in line by 7 p.m. can still vote regardless of whether it is after closing time.

On Monday, the College Republicans hosted a rally on campus to kick off the early voting period. Tuesday, the TCU Democrats hosted a fundraiser in the form of a professor dunk-a-thon at the Campus Commons, aiming to encourage people to vote.

Carrie Zimmerman, director of the First Year Experience, said she agreed to be dunked because she thinks voting is an important part of the democratic process.

“If you choose not to vote then you have given up your right to voice your opinion about anything that goes on in the country for the next four years,” Zimmerman said.

Zimmerman was also prepared to brave the colder weather while being dunked in water.

“For America and patriotism, I would be dunked in a snowstorm,” Zimmerman said.