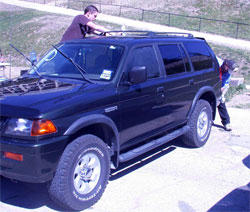 The vehicles of some students, faculty and staff received paint jobs last week – by accident. Work has begun to remove overspray paint from vehicles parked near or around the construction site of the athletics’ indoor practice facility.

The overspray accident was a result of the paint that should have dried in the air after being sprayed but didn’t, said Jeff Braden, team manager for Linbeck Construction.

Butler Painting was contracted by Linbeck to paint the facility and is therefore liable for the cost of repairs, Braden said.

Linbeck Construction has hired Nationwide Auto Services to remove the paint from vehicles.

The Nationwide Auto Services mobile-detailing center will be on campus in parking Lot 2 southwest of Amon Carter Stadium to repair damage this week.

The TCU community was notified of the incident in an e-mail sent Friday afternoon by Tracy Syler-Jones, assistant vice chancellor for marketing and communication.

As of Monday afternoon, 24 vehicles have been repaired and 32 people have stopped by the detailing center, said David Anderson, office manager for Nationwide Auto Services.

The company is expecting to repair about 200 vehicles, said Mike Malliton, director of operations for Nationwide Auto Services.

The paint removal can cost anywhere between $200 to $350 per vehicle, Anderson said.

Before any paint can be removed, the vehicle must first be inspected by a representative of Nationwide Auto Services or Linbeck to determine if it has been accidentally painted with overspray.

Anderson said a clay bar is also used almost like a “big pencil eraser” to erase any trace of the overspray paint.

The cleaning process takes up to two hours, Anderson said.

Braden said Nationwide Auto Services or Linbeck Construction would provide transportation after the vehicle is dropped off for washing.

Most of the painting of the facility was already complete when the incident occurred, therefore Butler Painting will finish the facility by hand, Braden said.

Construction of the facility is continuing as scheduled, Braden said.