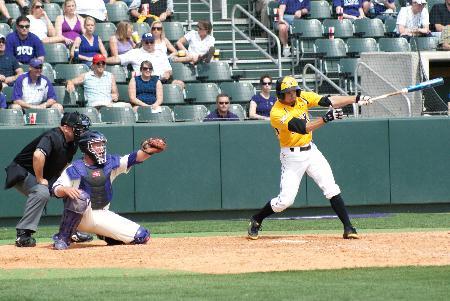 Except Horned Frog catcher Bryan Holaday’s; he’d rather catch a shutout from one of his friends on the mound.

“Catching a shutout, it’s not just me doing all the things – it’s everyone on my team that’s working toward the goal,” Holaday said. “That to me is a lot better than having one hit and winning a game that way.”

For Holaday, a junior business major in his second year as the Horned Frog starting catcher, just playing the game is all the motivation he needs. It’s that passion that keeps him on the field, head coach Jim Schlossnagle said.

“His best tool is how he plays,” Schlossnagle said. “He’s very respected by his teammates because he plays so hard, and he’s a pretty funny kid so he keeps the mood light.”

Holaday admits he’s a joker in the clubhouse, leading the team’s secret pregame rituals. He claims dancing is the calmest thing he does before games – all in the spirit of baseball.

“I like the guys in the clubhouse to have a lot of fun because we’re blessed to come out here every day,” he said. “I want everyone to make the best of it because it’s the most fun thing in the world to me.”

Coming out of high school, Holaday admits he wasn’t a highly sought after recruit, though he earned all-state honors two years in a row as a pitcher and shortstop at W.T. White High School in Dallas.

Holaday accepted an offer to North Central Texas College, a school that has produced several pro prospects, most notably Houston Astros catcher J.R. Towles. After an injury left the team without a catcher, Holaday, a shortstop at the time, volunteered to fill the position for the season, despite never having played catcher before. With the help of coach Scott Harp at North Central Texas, Holaday became a Division I-caliber catcher.

“He made it fun for me; he made it competitive and he made me really want to do it,” Holaday said about his coach. “Working hard at it was the only way I could pick it up.”

Holaday hit .348 with three home runs and 24 RBIs to earn all-conference honors for the Lions that season. Injuries at the catcher position at TCU gave Holaday an opportunity to come in and play right away – with just one season of junior college experience behind the plate.

(Friday game postponed due to weather)


“It’s a pretty hard adjustment coming in from (junior college) because the level of play is so much better,” he said. “But the guys here just make you work hard and that’s how you do better.”

Holaday’s stats for last season don’t reflect those of a rookie Division I catcher. He committed just three errors in 62 games for the Horned Frogs last season, his .311 batting average and 41 RBIs ranked fourth on the team and he caught 21 batters stealing, best in the conference.

“He just did really well, especially for a guy that’s converted,” Schlossnagle said. “He’s as good as a defensive catch-and-throw guy that I’ve coached, at least at the college level.”

Holaday’s biggest challenge behind the plate came from former Horned Frog closer Andrew Cashner. The pitcher sported a blistering fastball that reached the upper 90s on the radar gun and a knee-splitting slider that earned him a first-round MLB draft choice by the Chicago Cubs in 2008.

“He’d cross me up a few times, and seriously, it gets scary when you think a slider is coming and he throws a 97 mile per hour fastball at you,” he says with a chuckle.

Now, in year two behind the plate, Holaday is counted on as a veteran leader in the clubhouse and as a manager of a young pitching staff that has featured eight underclassmen in action this season. But Holaday is the right man for the job, Schlossnagle said.

“He’s done such a good job of keeping the pace of play going,” Schlossnagle said. “You see how quickly he gets the ball back to the pitcher and gets where he’s supposed to be, he gets the signs … and when you have that kind of on-field leadership behind home plate, it helps everybody.”

Frank Holaday, Bryan’s father, watches every game his son plays, talking baseball with students in the stands with a hint of Texas drawl in his voice. It’s been a dream come true for the former certified public accountant who resides in Dallas.

“I can’t tell you how much fun that my wife and I have had over the years, traveling to different cities and tournaments all over the United States,” he said. “The TCU experience for us has been unbelievable. The players, the coaching staff, the people we’ve met sitting in the stands – if it gets any better than this I couldn’t imagine.”