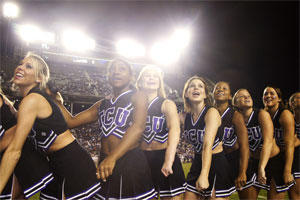 The cheerleader squad’s competition status is still in doubt in the absence of both a permanent head coach and show choreographer, cheerleaders said Tuesday.Former coach Jeff Tucker was fired Oct. 10 for undisclosed reasons pending an appeal process, and neither him nor the choreographer used during his coaching tenure have been replaced.

Senior cheerleader Troy Cole said the squad usually meets with a choreographer by the end of November to start planning the show it will use during competition in April.

“In past years, we would have gone out and shown our skills and have then start putting a routine together,” Cole said. “This year we haven’t been able to do that.”

Even though Cole graduates in December, he said the setbacks the cheerleaders are facing may keep them out of this season’s competition altogether.

“Personally, I don’t see it happening,” Cole said. “We don’t even have a place to practice right now because we used to go up to (Tucker’s) gym.”

Associate athletics director Scott Kull also placed a ban on basket tosses, one of the team’s stunts, until a permanent head coach can be found.

“We’re not allowed to do basket tosses, and that’s one of the categories at the competition, so that could keep us out,” Farris said.

Farris said the team is still out of its normal routine.

“We’re really behind as of right now,” Farris said. “We’re not practicing as a team at any gym; since our last football game, we haven’t had a practice.”

Several other cheerleaders declined to comment but deferred to cheerleader captain Jovan Farris, who could not be reached for comment.

Kull could also not be reached after several attempts, and Tucker was unable to speak on the matter.