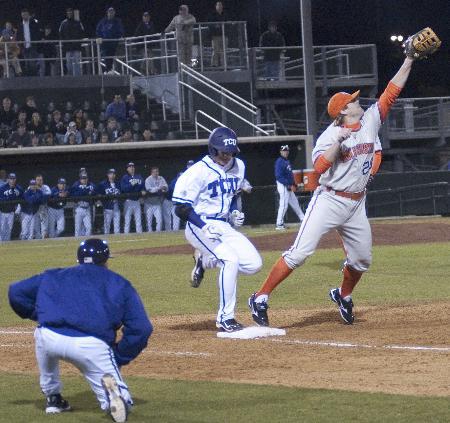 Horned Frog football head coach Gary Patterson chose the Tarrant Area Food Bank as the charity to receive a $10,000 donation as part of his 2009 Bobby Dodd National Coach of the Year Award honors.

According to the TAFB website, the program is in place at area schools where at least 80 percent of the students are eligible for free or reduced-cost meals.

Patterson said TAFB was an easy choice as the recipient of the donation.

“There are so many people that are hungry,” Patterson said. “The food bank is a great way to give back to the Fort Worth community and to help people in need.”

Patterson said donating to organizations that benefitted children in Fort Worth was very important to him.

Additionally, the Gary Patterson Foundation provides funding for programs and scholarships that focus on education, life-skills, health and family issues.

According to the Bobby Dodd Foundation website, the Coach of the Year Award is meant to honor the Bowl Championship Series college football coach whose program represents quality on and off the field. Each year the winning coach is given a $10,000 check to be donated to a selected charity in the coach’s name.

Kent Keasler, representative for the Bobby Dodd Coach of the Year Foundation, said Patterson was chosen for his success both as a coach and a philanthropist.

“He has had success throughout all of his time at TCU,” Keasler said of Patterson. “He is active within the community and supports a number of children’s charities.”

Patterson’s success on the field is just as impressive as his success off the field, Keasler said.

“Gary is a very deserving coach,” Keasler said. “TCU is very fortunate to have him.”

Kim Raines, a sophomore nursing major, said Patterson’s donation demonstrates the character of the coach and the team outside of game time.

“Kids look up to athletes,” Raines said. “The fact that such a well-known coach would make children’s organizations and programs a priority means a lot and sets a good example for the rest of the community.”

Anderson accepted the donation on behalf of TAFB from Patterson on April 10 at the football team’s banquet. She said she was thrilled to have support for the BackPacks for Kids program.

“The TCU community has always been wonderful supporters of the Tarrant Area Food Bank,” Anderson said.

She said she hoped the support from Patterson would encourage others to continue to donate their time and money to the TAFB.

For more information on the Tarrant Area Food Bank or the BackPacks for Kids program, contact Volunteer Coordinator JoAnn Biggers at 817-332-9177.