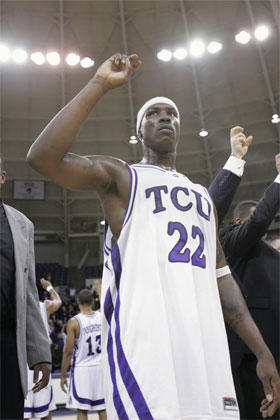 According to Webster’s New World College Dictionary: Fourth Edition, the word eternity is defined as time without beginning or end; a long period of time that seems endless; or the endless time after death. For senior forward Chudi Chinweze, the definition is much more specific: exactly 548,627 minutes.

Since Chinweze suffered a season-ending left knee injury against Kansas on Dec. 9 of last year, the countdown to his return has been anything but quick.

Chinweze finally made his 2005 season debut Dec. 20 against Colorado, nearly a year to the day after his career-threatening injury. Head coach Neil Dougherty said Chinweze’s rehabilitation has been slow, but effective.

“I wouldn’t say he’s 100 percent,” Dougherty said. “He still has to go through a lot of therapy. But what has happened is his surgeries have all been excellent.”

Chinweze said his teammates were instrumental in his recovery process.

“They had a lot of faith in me,” Chinweze said. “They let me know how important I am to this team.”

Chinweze said that although he is not yet at his highest level, he is learning to contribute in ways other than scoring and rebounding.

“I’ve lost some of my aggressive ability,” Chinweze said. “I’m not as fast as I used to be, but I’ve been trying to take advantage of my vocal ability on the court, as a leader.”

Chinweze is already making a statistical impact on the court. In just 10 games, Chinweze is leading the team in blocked shots – in both total number and average for each game. Dougherty said Chinweze’s highly physical style of play is both an inspiration and an exasperation.

“He gives us more activity around the basket, Dougherty said. “But like I’ve told him, he just has to ease himself back in.”

Chinweze’s presence has boosted a team that has struggled so far this season.

“He kind of lifts other people with his reckless disregard for self, and he has lifted this team competitively,” Dougherty said.

Chinweze said he needs to wait a little longer before deciding on his future.

“I want to see how the season goes,” Chinweze said. “But I want to play basketball … maybe even go into coaching.