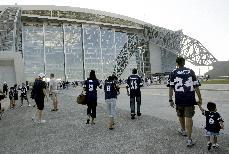 This weekend Arlington will host the spotlight of college football week one at Cowboys Stadium. Two top 25 teams, Brigham Young University and the University of Oklahoma, will face off in a battle with tons of late season implications not only for the two teams playing, but also for TCU.

Later in the season, the big top in Arlington will host former Southwest Conference rivals Texas A&M University and the University of Arkansas in the first match between the two teams since 1991, Baylor vs. Texas Tech, the Big XII tournament, and the long time Metroplex tradition, the AT&T Cotton Bowl.

Big college football programs are realizing the kind of national attention playing in the new stadium brings. But left out of this list is TCU, the big-time college program that sits in Cowboys Stadium’s backyard.

The biggest weekend for college football in the Dallas-Fort Worth Metroplex is always Texas-OU weekend at the State Fair of Texas. Two college rivals travel almost exactly half way between each campus to fight for some of the most important bragging rights in the South, and in recent years a trip to the National Championship. The neutral site provides equal opportunity for fan turnout, so both teams have to deal with the same fan related problems as home-field advantage is thrown out the door.

In the shadows of Texas-OU is another very old Metroplex tradition, the DFW Battle for the Iron Skillet. The Interstate 30 matchup has in years past determined national championships and was one of the hottest tickets in town. Now, as TCU has propelled itself back into the national spotlight and SMU has struggled to recover from the death penalty after their “Pony Express” years, the game isn’t as important on a national level, but still has relevance in the local community.

This year, as TCU is projected by many to be the top BCS buster candidate, the SMU-TCU game means more than most national reporters would ever think of writing because a Pony win would wreck any chance of TCU achieving college football Nirvana. So why not bring some national attention back to one of the game’s longest running rivalries?

As Metroplex residents have seen, if you open the doors of Cowboys Stadium for any reason, people will come to see the giant video screen and all that the building has to offer.

However, there are a few factors standing in the way. Both school’s athletic directors commented on each school’s desire to keep football tradition on campus. SMU plays in the recently built Gerald J. Ford Stadium and TCU is doing work to build what TCU athletics director Danny Morrison says will be the Camden Yards of college football at Amon Carter Stadium.

“Our primary focus is to play our games at Amon Carter Stadium because we love the on-campus venue, but that doesn’t proclude us from at some point looking at a game in the Cowboys Stadium,” Morrison said.

Steve Orsini, SMU Director of Athletics, said that SMU has no desire to play home games in Cowboys Stadium but would consider playing a road contest in Arlington.

Next year’s duel is scheduled to be in Dallas.