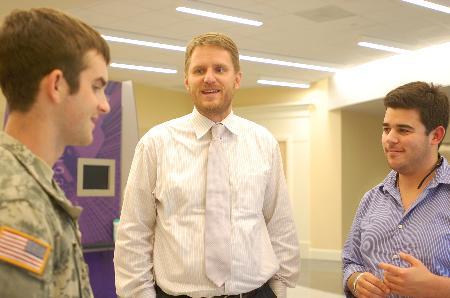 Developers have contributed to parking problems around campus by acquiring two-bedroom residential houses around campus and converting them into five-bedroom duplexes, Burns said.

“(Developers) build five-bedroom duplexes on either side of the street, and they only have two parking spots,” Burns said. “But they are adding 10 cars to the street. There’s literally not enough street to park all those cars.”

The City Council will look into redoing the parking lot requirements for duplex zoning because of concerns expressed by the campus community, Burns said.

The councilman said he is also pushing for another commuter train that would travel from downtown Dallas into downtown Fort Worth. The intersection of Cleburne Road and Berry Street, which is about a mile from campus, would be a rail stop for the commuter train.

“The planning process is going pretty well,” Burns said. “We are looking at trying to get funding from the federal government.”

The commuter rail station could be operational by 2013, he said.

Brett Major, a senior psychology major, said he was concerned about safety in the neighborhoods around the university.

“I talked to (Burns) about concerns I had about safety in the neighborhood, specifically regarding street lights,” he said.

While Major was waiting, Burn’s council aide, Kristi Wiseman, sent an e-mail to a city committee to try to get something done by Oct. 1, Major said.

“Generally, everything officers do are based on what their decision is,” Russell said. “The citizens call me personally. They have a personal relationship with us, so they can call me, and I have a lot more time. Regular patrol officers just answer calls.”

Clint Stephens, a freshman nursing major, did not know who Burns was or what he did.

“I just wanted to know what (Burns) was about and what he was doing,” he said. “Instead of, ‘Hey look, I’m a big bad city councilman,’ it makes him more human.”

Burns said many people are hesitant to pay City Hall a visit.

“The origins of how I decided to start doing this was that I recognized that there were people I was talking to at neighborhood meetings that said, ‘I don’t like coming downtown,'” said Burns, a representative of District 9, which includes the university and surrounding neighborhoods. “A lot of people are intimidated by coming downtown.”

The councilman said 10 to 15 students and an equal number of members from surrounding neighborhoods approached him Thursday.

Major said he would not have gone downtown to talk to Burns about his concerns.

“I just saw that he was on campus, and I thought I’d stop by for a little,” Major said. “I think it’s a benefit if TCU students go and talk to him.”

Neighborhood Office Hours will be an annual fixture at the university, Burns said.