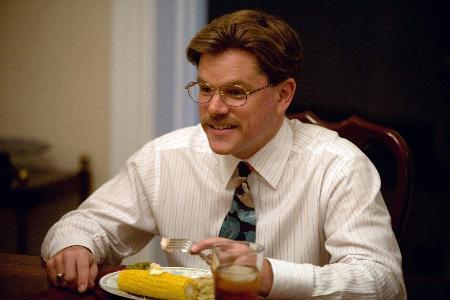 Even on paper, corporate espionage sounds kind of dull.

Based on the true story of Archer Daniels Midland Company (ADM) executive Mark Whitacre, “The Informant!” has Matt Damon playing a whistleblower who turns on his own company after he finds out they have been involved in price fixing of a food additive.

The problem is he thinks that makes him a secret agent. Worse than that, he is also lying about almost everything else.

The comedy comes with a straight face and is delivered with a dry tone that could polarize some audiences. The slow and deliberate pacing of the film could also cause some to check their watches. “The Informant!” isn’t laugh-out-loud funny, but it is a pretty incredible true story of a flawed hero that has its moments.

A lot of the laughs come from what could be the strangest use of voiceover in a film. Whitacre is usually thinking about why polar bears have black noses when he should really be thinking about how he can get out of the hole he has dug himself. Whitacre is a fool and a criminal but, by most accounts, a national hero too.

The upbeat and sunny ’70s sitcom music score by Marvin Hamlisch sounds like the music playing inside Whitacre’s head; with a hint of menace, the soundtrack is perfect for inhabiting the crawlspace of Damon’s frustrating character.

Director Steven Soderbergh divides his time between making A-list crowd pleasers like the “Ocean’s Eleven” films and bucking the Hollywood mold with indies like “Bubble” and “Che.” Soderbergh seems like a man Whitacre can identify with: torn between the system he works for and his own individual dreams.

“The Informant!” is rated R and is in theaters now.