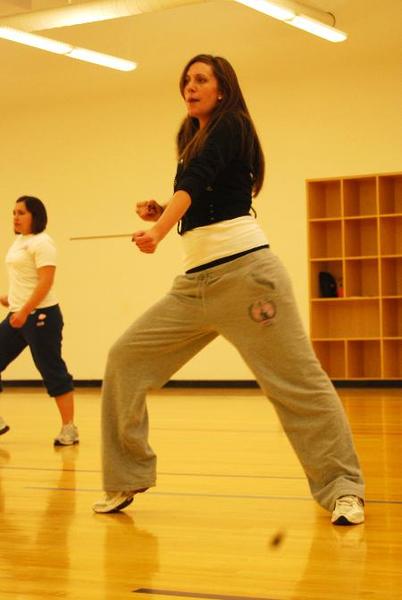 Under the eight rows of fluorescent lighting that shine down on the hardwood studio known as the Rippit Room, 12 people await to continue the routine they started practicing the previous week.

Perspiration begins to roll down the noses of a couple of the students in the hip-hop dance class, with drops of sweat, from the face of one student, falling to the floor.

As one student walks in a few minutes late, the four faces that make up the back row of stretching stare at her, with their right legs stretched across their bodies and over their left legs, as she slowly jogs to the side to join them.

In the front row, two female students to the far right and another one to the far left seem to be repeat customers to the class, knowing the routine as well as if a spot as one of Kanye West’s backup dancers for his May 1 Dallas show depended on it.

For others? Well, the mirrors they gaze into are not kind and reflect the truth about their performances.

But this is still a class – this is Stephanie Remigio’s class.

Just minutes before, Remigio, equipped with a microphone headset, was leading an array of freestyle warm-up stretches to Rihanna and Timbaland tracks.

This is a far cry from the usual soundtrack at the University Recreation Center, leather Wilson basketballs hitting hardwood and Nikes of all designs, shapes and colors bouncing off treadmill tracks high above.

Not far removed from dancing for Jimmy Buffett’s “Margaritaville” crowd and performing with Smash Mouth at the 2006 AFC Championship Game in Denver, the sophomore business and marketing major has spearheaded the hip-hop dance class in correlation with the fitness and wellness program since last semester – an experience she almost cannot bring herself to believe is happening.

“How many people (my age) get to teach on a college campus and have their own class?” she asked.

For the routine, she pops in another Rihanna song, this one called, “Breaking Dishes.”

After several practice runs of a routine broken down into four distinct eight- to 10-move sets, the Denver native asks her class to take a seat and watch her perform what will eventually be the final product.

The step-by-step instruction she had just given an inexperienced dancer is so five-minutes-ago once the class began to crowd around Remigio like first-graders do around a teacher during story time.

Who could have envisioned this when she was 6 and had just seen “Dirty Dancing” for the first time?

“I was convinced I was going to marry Patrick Swayze at 6,” she said with a feminine laugh, admitting she did not understand the plot as well as the dancing.

A series of rights, lefts, twists, turns, thrusts, jumps and rolls brings out the artistry and creativity of a record that is perhaps destined to be relegated for the club rats of Sundance Square and downtown clubs nationwide. The music reverberated off the walls now like it had in the previous run-throughs, but in seeing the focus and intent on the 20-year-old Italian-American’s face, the alter ego that comes out when she dances – the one she gave a precaution to a day earlier – was a tour de force of fluid motion, letting the music take her to a different place away from the Rippit Room.

Less than 10 seconds later, she thrusts her arms and hips in opposite directions with a brush-off move.

OK, it is the class’ turn. Care to take a chance on the floor? Putting students at ease and not intimidating them with her advanced discipline and instilling a no-fear attitude are a couple of Remigio’s strengths as a teacher, said Justine Sanchez, a regular to the class.

It also leaves students such as Sanchez heading for the bed soon after class has wrapped up.

“Most of the time, I just want to go back to my room and sleep,” said Sanchez, a freshman education major from Los Lunas, N.M. “I find it really gratifying to know that she will push me that hard in class.”

And this is the only way Remigio, someone who was brought up on a steady diet of Wade Robson and Paula Abdul routines, knows how to operate.

“I love killing people in class,” she said. “If you pay money for a class, I would want the teacher to push me to my limits.”

Yes, class was in session and the teacher – donning an athletic black hoody with a white Celtic cross on the back, black sweat pants with “Shorty” stitched in pink on the left thigh and gray Adidas cross-trainers with pink soles – had everyone’s attention.

“That’s what I live for,” she said. “I would rather come to dance class than drink an energy drink. This is my adrenaline.”

When she first came to TCU, there was a considerable void in Remigio’s life. Instead of dancing to upward of 36 hours a week at Cherry Creek Dance Co. in Denver, she had nothing, no outlet to practice a routine to that new Justin Timberlake song. She would find herself practicing alone in her dorm room.

At the urging of her roommate Melisa Johnson, Remigio sent in an audition tape to Stacy Cintron, the assistant director of wellness and fitness at the Rec Center, in hope of having the opportunity to teach her own dance class.

It was clear to Cintron that something was special about Remigio’s talent, especially as a sophomore in college.

“After seeing Stephanie’s abilities from her audition tape, there was no need for me to feel hesitant of her abilities,” Cintron said. “Her dance experience far exceeds her academic classification.”

Remigio exudes intensity when executing the routine to the Rihanna song. But it is an intensity that her students can feed off of, Sanchez said.

“Stephanie brings a really high level of intensity to the class when she is doing the dances, but it is not a scary, intimidating type of intensity where you never think you will be able to get it,” Sanchez said. “It is an intensity because she loves what she is doing so much that it makes you want to be able to do the dance just as good as she can.”

That same intensity has carried her to multiple scholarships and apprenticeships as well as opportunities to dance for Buffett and perform at Denver Nuggets and Denver Broncos games. It also had her dressing up in a white unitard and playing a statue at a wedding, which to date is her most unusual request.

The Smash Mouth performance may be the most memorable, but it wasn’t for the dancing that happened Jan. 22, 2006 at Invesco Field.

In the pregame festivities leading up to the AFC Championship Game between the Broncos and the Pittsburgh Steelers, Remigio danced with Smash Mouth as the band performed – you guessed it – “All Star.” But she also helped unravel a football-sized American flag across the grass for the national anthem, and while she was running with the flag, she blindly ran into Ben Roethlisberger, the 6-foot, 5-inch quarterback for the eventual Super Bowl-champion Steelers.

Even with the hit, she takes a little bit of pride knowing she didn’t fall.

Served With A Smile

Sensing that class is coming to an end, Remigio splits the now-11-person class into two groups to show off the routine.

Before the first group sets out to do the routine, class member Adrienne Taylor gives a precaution to the rest of the class.

“I am 42 years old and this may be really embarrassing,” she says. The response elicits friendly laughter, the kind of positive support system Remigio has instilled in the class.

After the first go-through, Taylor is flawless and receives applause with her group for completing the routine.

Taylor, who is an instructor for yoga and abs classes at the Rec Center, was unsure of how a person like herself would fare in Remigio’s uber-intense program.

“She’s definitely an expert in her field, you can tell. I’m old, so for me, anything’s new, but she definitely taught me some new stuff.”

To finish the class, the two groups would battle in a scene reminiscent of something straight out of “You Got Served,” sans the trash-talking and with more fluorescent light.

Class has come to an end, but not before Remigio tells them to come back and that they did a great job. This is what keeps students coming back for more. Well, and her, too.

“She has taught me that even if you only know a little part of the dance to do that part great,” Sanchez said.