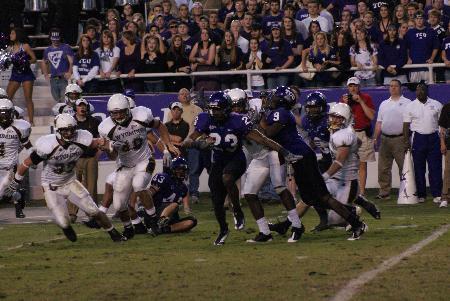 While the campus played host to alumni for Homecoming weekend, Jimmy Young was throwing a coming out party.

The sophomore wide receiver posted a school-record 226 yards on five catches for three touchdowns in the Frogs’ 54-7 rout of the University of Wyoming Cowboys.

“It feels great, but it’s going to be something I have to forget about here in these next weeks and just put my focus on UNLV,” Young said.

Sophomore quarterback Andy Dalton found a wide open Young down the middle of the field on the fourth play from scrimmage for a 60-yard touchdown. With 9:03 left in the second quarter, Young made his second trip to the end zone on a 55-yard strike from Dalton on the same play, Dalton said.

“They were going to a cover three, so we were hitting them with an inside vertical,” Dalton said. “They couldn’t get the safety over in time, so we kept hitting them on a big play.”

The two hooked up again late in the third quarter on a 39-yard touchdown pass.

Dalton completed 16 of 22 passes for 334 yards and four touchdowns. He added 21 yards on the ground and a touchdown.

A 65-yard catch-and-run by Young, his longest reception of the night, set up Dalton for his one-yard rushing touchdown.

Wyoming was No. 1 in the Mountain West Conference in pass defense entering the game, surrendering only 159.7 yards per game through the air.

But the Cowboy-run defense is what gave the Frogs fits. The team went for 110 yards on 39 carries, the second-lowest total of the season behind the loss to the University of Oklahoma. Young and Dalton’s explosion came at an opportune time, with the team able to rush for only 2.8 yards per carry.

“When people start putting more people in the box, at some point in time you’ve got to be able to throw the football,” Patterson said.

Early on, Patterson said the Cowboys utilized some offensive formations that the defense wasn’t ready for and that having two weeks to prepare for the game helped Wyoming take a closer look at the TCU defense. Running back Devin Moore became the first 100-yard rusher against the nation’s best run defense this season with 120 on the day.

“Their running backs are good players,” Patterson said. “Devin Moore has had more yards these few years than most people have.”

Patterson was disappointed with the lack of emotion and energy the team had.

“We were kind of emotionally down,” Brown said. “We didn’t come up just charged like we were last week against BYU. We knew that we had to get some kind of spark.”

After Wyoming cut the lead to 14-7, the Horned Frog kickoff return team broke the huddle on “spark,” Brown said. And that’s exactly what the senior provided.

Fielding the kickoff at his own 15, Brown sprinted 85 yards down the middle of the field to the end zone for six . Brown said he was frustrated after running out of bounds on long returns against the Oklahoma and BYU.

As Wyoming’s Dax Crum, the back-up quarterback, scrambled to his right, linebacker Robert Henson came up to deliver a crushing hit and jarred the ball loose. Defensive end Wayne Daniels fell on the ball at the Wyoming 19.

Freshman wide receiver Antoine Hicks gave his best impression of sophomore wide receiver Jeremy Kerley on the next three plays, taking three direct snaps and carrying them for a total of 21 yards. Dalton closed out the drive with a play action pass to fullback Justin Watts for the score, putting the Frogs up 45-7 early in the fourth quarter with the extra point by freshman Ross Evans.

After a three-and-out forced Wyoming to punt, Hicks made his presence felt once again by blocking Austin McCoy’s punt, resulting in a safety. The safety set up Brown for a 54-yard return on the ensuing safety kickoff. Brown assumed the role of punt returner with Kerley limited to holding field goal attempts.

“I just knew I had to really carry us on punt returns because I had never done punt returns,” Brown said. “It was kind of different trying to look up and down. I just trust my teammates. They were trying to help me out on the sideline, screaming if I had it or if I should fair catch.”

With 4:13 left to play, freshman corner back Greg McCoy picked off a pass from Chris Stutzreim on the sideline and returned it 24 yards to the Horned Frog 47 yard line. It was the first of McCoy’s college career.

Oklahoma is still the only team to score more than once on the Frogs’ defensive unit.