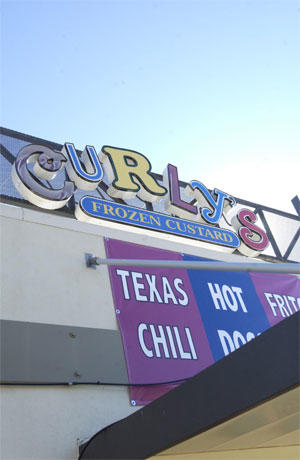 Curly’s Frozen Custard is one of those places I always mean to go to. It’s right there on Camp Bowie Boulevard, it’s colorful, and, in the middle of a Texas drought, it just looks so good.

Finally, I went for it.

Sure, it’s the supposed middle-of-winter, but with the weather as mild as ever, now is as good a time as any to try some frozen custard.

While it took a few loops around the block to get into the narrow drive-thru, the chocolate custard —- called a “concrete” – mixed with a topping of your choice was better than anything Dairy Queen has ever sold.

The stand also offers shakes, hot dogs and in the winter, hot chocolate.

Curly’s is a little pricey, running about $3 for a concrete, but the quality is worth the extra pennies.

After a day of roaming the shops on Camp Bowie Boulevard or touring the museums in the cultural district, Curly’s is the perfect end to a lazy Saturday afternoon.

First opened in 2002, Curly’s doesn’t look like it will be going anywhere, but that doesn’t mean you should waste any time in heading down for a good break from dictatorial Dairy Queen.

Nestled between the Stockyards and Interstate-35, Mercado Juarez Cafe offers good food, fast, friendly service and a unique atmosphere – all at a moderate price.

Mercado is perfect if you’re on the go or looking to stay a while. The chips keep coming and the drinks flow. Get there before 7 p.m. and Mercado signature margaritas are available for $3 a pop, Monday thru Friday. Meals range from $8 to $16, and lunchtime prices are greatly reduced. You’ll never have to worry about leaving hungry.

Besides the tender meat and dangerously good margaritas, what sets Mercado above the run-of-the-mill Mexican restaurant is its character. With its expansive dining area and high ceilings, Mercado looks like a converted warehouse. The space is put to good use with clearly defined smoking and nonsmoking sections, a private-party room and bar – and it’s not everywhere you can dine indoors beneath trees wrapped in Christmas lights.

For a night out, lunch, dinner or happy-hour drink specials, you can’t go wrong with Mercado Juarez Cafe.

According to a study in Men’s Fitness magazine, Fort Worth has more doughnut shops per capita than any other city surveyed – about four times the national average.

Donut Palace in West Cliff Shopping Center owes its success to its own tasty cakes, as well as Fort Worth’s passion for pastry.

One of the more expensive items, homemade pigs in a blanket, will cost you 75 cents each. Tasty cake doughnuts coated in sugary frosting run a mere 46 cents each, while the upgraded sprinkled fancies cost 53 cents.

Donut Palace accepts credit cards – but only for orders of more than a dollar. I found out the hard way and ended up digging through my car for change, but the hunt was well worth it. My strawberry-frosted cake donut was the perfect treat for an early morning.

An alternative to chain Tex-Mex

wYou’ll have to plot out your course, however. Located between Vickery Boulevard and Interstate 30, Pulido’s is tucked away from the main rows of Fort Worth dining options.

Unlike chains like On The Border and Don Pablo’s, low ceilings and colorful walls give the restaurant an authentic feel, and the small building makes the atmosphere very communal.

Pulido’s provides Mexican food with a friendly atmosphere, as well as a full bar, where you can get anything from daiquiris to margaritas.

Prices are very reasonable: Entrees range between $6 and $8. Dress is casual.

Pulido’s prime selling point, however, is the handmade tortillas, made just down the street. Make sure you request them with your meal.

Next time you have the hankering for good Tex-Mex, skip the On The Border and check out Pulido’s Mexican Restaurant for some authentic local flavor.

Fine New Jersey subs is what The Great Outdoor Sub Shop is all about.

What started out as one man’s mission to provide what Dallas was missing – good eastern-syle subs in the heart of downtown – became a booming business of eight shops in the Dallas/Fort Worth area.

Each shop is decorated uniquely to fit the feeling of escape – the Fort Worth location uses hand-painted wilderness images complete with a small ice cream bar, dedicated to making homemade shakes, malts and sundaes.

Whether you’re looking for simple or elaborate, The Great Outdoors has a sandwich just for you with 24 subs, five croissant sandwiches, six healthy sandwich options, five salads and four breakfast possibilities to choose from.

The Great Outdoors wouldn’t be complete without offering sweets. Choose from fresh cookies, brownies, New York Cheesecake with toppings or anything from the ice cream bar.The only downfall to this delicious subway-style shop is the wait during peek lunch time.

In the industrial area of Fort Worth, behind old, abandoned warehouses, yet in the heart of the cultural district, lies a small dive replete with its own history and culture.

Where the walls are far from being bare and the unfinished cement floor would suggest anything but high-class, Fort Worth’s finest find Fred’s Texas Cafe unavoidable. Even Patrick Cranshaw, better known as “Blue” from Old School, once frequented Fred’s every morning before passing just before Christmas.

The Fred’s favorite remains the infamous Fredburger with cheese and added jalapenos.

What makes Fred’s unique is the hodgepodge of beer signs, postcards, odds-and-ends and neon bar dÂcor.

The slow-spinning ceiling fans and the old 50s-style bar lined with Texas cowboys only adds to the southern ambiance. A four-time winner of Fort Worth Weekly’s Best of 2005 and rated the 2004 Best Greasy Spoon, Fred’s is just that.

If you’re a first-timer to Fred’s, be sure to say so. There’s an extra surprise for new guests at this cash-only, fine Fort Worth establishment.