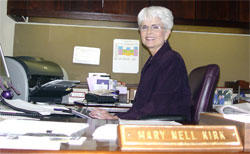 The face of TCU may not be as obvious as one thinks. It is not the students, the staff or even Chancellor Victor Boschini.Often dressed in purple, Boschini’s executive assistant, Mary Nell Kirk, is very much the face of TCU and frequently greets people when they visit.

“Mary is often the first person people see when they walk into my office,” Boschini said. “She possesses the great gift of making everyone that comes into the office feel comfortable.”

Kirk, who has worked in the chancellor’s office for 15 years, has assisted the last three chancellors but remains elusive to most of the TCU community.

“I just love my job and dealing with all the new people and trustees,” Kirk said.

She wouldn’t describe herself as a people person, but loves all the different elements her job entails, she said.

Boschini said Kirk helps him keep his days in line.

“She organizes my calendar, which is very demanding, and leaves me little note cards that schedule my daily events,” Boschini said.

Described by her husband, Jon Kirk, as accommodating, gracious and conscientious, Kirk embodies those qualities in every aspect of her life.

“Her three children and grandchildren are her life,” said Donna Johnson, executive assistant to the provost.

The devoted mother and grandmother has never missed any of her children’s football games and regularly spends time with her four granddaughters.

“We always take the grandkids skiing, and we love to travel,” Jon said.

Along with family trips, the Fort Worth native also loves traveling to all the TCU football games.

Boschini has noticed that, too.

“She has more purple outfits, purses and jewelry than anyone I’ve ever met,” Boschini said.

Along with being a TCU football fan, Kirk also enjoys needle-point, reading fiction novels and is a self-described devoted Christian.

“I have attended the same Baptist church that I went to when I was growing up,” Kirk said.

She has also been singing in the church choir since she was 14.

Although Kirk has seen many changes to the Fort Worth area, she has also encountered many changes in her job.

“The job of the chancellor’s secretary has evolved greatly in last 15 years,” Johnson said.”Mary should be credited with the great ability to adapt to her ever changing role.”

“Her best attribute is that she possesses so much institutional history,” Boschini said. “She is really good at remembering people and places.”

Although she may be somewhat of a behind-the-scenes woman, Kirk’s enthusiasm for TCU and gracious manner make her the ideal face of the university.

“I think I would cry if someone told me that I couldn’t come to work anymore,” Kirk said. “I just love my job.”