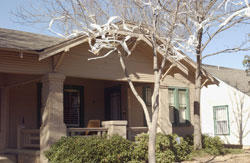 TCU-area residents will meet tonight in hopes of settling the storm brewing over what some consider to be inconsiderate student neighbors.A public hearing will be held at 7 p.m. in the Kelly Alumni Center, to allow local residents, students and nonstudents to respond to recommendations concerning parking problems, loud parties, littering and drinking in the Frisco Heights and Bluebonnet Hills neighborhoods.

The Unrelated Persons and Rental Registration Task Force, the group assigned by the Fort Worth City Council to recommend possible solutions to these problems, made suggestions to the last week in an effort to quell traffic congestion, noisy parties, littering and other disruptive behavior in the TCU area.

If the task force’s proposal is enacted, residents will be issued parking permits, by which the police can differentiate residents’ cars from those belonging to nonresidents and tow those that don’t belong in the neighborhood.

Jordan Bastable, a junior entrepreneurial management major and landlord on Corto Avenue, said he is concerned people might get ticketed for parking on the street to visit friends.

According to the task force’s proposal to the City Council, residents would not only be required to buy $5 stickers for their vehicles, but would also be forced to cover the cost of signs detailing parking restrictions on neighborhood streets at a cost of around $1,100 a block.

Jim Johnson, the Bluebonnet Hills Neighborhood Association president, said it is unreasonable for residents to incur such heavy costs.

“I think it is prohibitive and residents might not respond to that,” he said.

The effects on students living in the area extend beyond concerns about parking tickets.

The legal limit for unrelated people living in one house is five in Fort Worth. The task force is divided on lowering that limit so it did not make a recommendation to the City Council, Johnson said.

“Homeowners are saying that the number (of unrelated persons in a household) should be reduced,” Johnson said. “Five unrelated people to a home is not conducive to a quiet and pleasant neighborhood environment.”

Other members, such as realtors and apartment owners, maintain that the limit should remain the same because reducing it is not in their economic interest, Johnson said.

Alex Southern, of the Fort Worth Code Compliance Department, said it is hard to ticket homes with more than five unrelated people because it is nearly impossible to prove whether they are related.

Marsha Cowdin, former president of the Frisco Heights Neighborhood Association, lived on Merida Avenue for 40 years. Cowdin said she had to move out of her home in November 2004 because of constant littering and loud parties by her student neighbors.

“The students would have loud parties, block the driveway and litter the streets every weekend, especially Thursday nights,” she said. “I reported to the police, but that did not stop them. So I decided to sell the house and move out.”

Laura Webb, a resident of Merida Avenue, said the residents on her street are frustrated with loud parties as well. She cited an incident where her next-door neighbor had a party that disturbed her until 5:30 a.m.

While some residents still lament, Paul Diffee, a TCU student living on Corto Avenue, said he and his three roommates received noise violations from the Fort Worth Police Department.

He said locals should realize they live close to a university.

“It is a college neighborhood and residents should accept that this is the way it is,” Diffee said.

Bastable, who owns three houses leased by TCU students, said the lack of communication between students and their neighbors is cause for concern.

“The neighbors don’t address the problem with the students,” Bastable said. “So it escalates and students don’t know which neighbor is being bothered.”

Greg Hughes, spokesman for TCU-area neighborhoods, said changes should be carefully considered because laws implemented to address specific problems in the TCU area would affect all of Fort Worth, including people who cannot afford to live in a home with fewer than five unrelated residents.