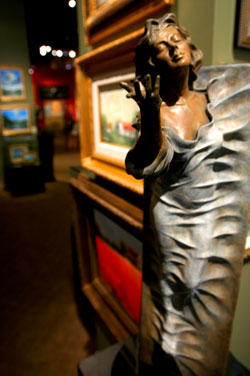 After 14 years of seemingly perpetual relocation, the Milan Gallery has moved once again. Resting at 505 Houston St., a block south from its original location, the Milan Gallery now faces the setting sun and a new chapter in its history.The gallery had its grand opening for the new location on Aug. 11. Tal Milan, the director of the gallery, said hundreds of people circulated in and out of the main room.

The main room of the new location is a better fit for larger crowds than the original site, said Tal Milan. Although the sizes of the two locations are similar, approximately 3,000 square feet, the more open layout of the new location grants more wall space and visual access to the gallery’s collection of more than 600 paintings.

The array of works is evident as soon as one enters the gallery. Facing the doorway are the wine bottle still-life paintings by Thomas Arvid. Near the doorway of the gallery sits a stainless steel sculpture by Jerry Dane Sanders. Detailed watercolor paintings by Laurin McCracken occupy a portion of the southern wall. Adjacent to the doorway is an exclusive reproduction of Michelangelo’s “Madonna della Pieta,” cast from the original mold and licensed by the Vatican. However, most of the works on display at the gallery are by contemporary artists.

The north wall of the gallery displays impressionistic pieces by Tal Milan’s mother, Henrietta. Her paintings often focus on floral subjects and placid landscapes that are comparable to the works of Claude Monet.

A Brief History of the Gallery

In 1979, Henrietta Milan transformed her home studio into a gallery, which was open to those who made an appointment. As Henrietta Milan’s works began to sell more and more, Tal Milan found himself marketing her works.

By 1988, Henrietta Milan’s works were selling at a pace that allowed Tal Milan to leave his pharmaceutical job to act as a full-time manager and marketer for his mother’s artwork. By 1992 the Milans were able to open a gallery in downtown Fort Worth, where it has remained ever since.

Works in the gallery have moved six times in and out of four additional locations.

Explaining the departure from the branch location on 4th and Main streets, Tal Milan said, “It wasn’t a good business decision to expand on the same block.

“We already had a presence [in Sundance Square]. By doubling our presence, we did not double our sales.”

A passion for gymnastics is also a family tradition for the Milans.

Both Jerry Milan, Tal Milan’s father, and Henrietta Milan were gymnasts at DePaul University. Henrietta Milan was named the U.S. National Gymnastic Champion in 1959. Her gymnastic aspirations led her to tryout for the women’s gymnastic team for the 1960 summer Olympics in Rome. Henrietta became an alternate for the Olympic team after placing tenth in trials, when only eight are accepted. In honor of that round of the Olympic Games, she named her son, born six months before the games, Rome.

Rome Milan continued this tradition of nomenclature. He named his daughters Sydney, Paris and Athens, in honor of the Olympic Games held in those cities.