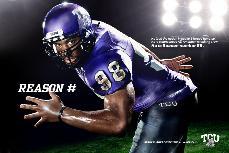 “He led the nation in sacks and forced fumbles. He’s a consensus All-American wrecking crew,” boasts a booming voice. According to the television commercial, senior defensive end Jerry Hughes “is reason number 98” to watch TCU football in 2009.

The new advertising campaign for the Horned Frog football program features junior quarterback Andy Dalton, Hughes, senior linebacker Daryl Washington and four others in a series of radio, television, newspaper, Web site, e-mail and just about every other type of ad known to man. The players in the ads were selected based on seniority and their career accomplishments, and each one of their numbers represents the number of reasons there are to watch the team play.

The athletics marketing department selected the premise from a number of options from a Fort Worth-based ad agency called Concussion because of the versatility of the idea.

“Obviously there’s so many different numbers on the jerseys we could use,” Director of Athletics Marketing Jason Byrne said. “You could work in your ranking and your ticket prices, all those different things that reflect back to a number.”

The process of shooting the ads tested the athletes’ patience and endurance, as the shoot for each player took an hour or more of intense photography in the Sam Baugh Indoor Practice Facility. Transforming the facility into a Hollywood studio for two spring days were a team of Concussion photographers and videographers that descended on TCU. It ended up being an intricate process that even called for each player to go to the equivalent of a Hollywood makeup artist on a movie set to make their uniforms look the way the photographers wanted.

“They had to get in uniform and make it look as realistic as possible, whether it’s dressing up the uniform with dirt, sweat, mud on the face and things like that,” Byrne said. “It’s amazing to watch those professionals work and the extent to which they need to capture the light and the player movement.”

The two video ads, featuring Hughes and Dalton, as well as each individual photograph advertisement uses a statement about the player. The videos are featured prominently on TCU Athletics’ YouTube channel, which has more than 2,300 views.

Byrne said the marketing department and Concussion tried to keep the statements centered on awards and on-field accomplishments, but that was not always possible.

In the case of junior wide receiver Jeremy Kerley the picture reads “he is willing to suffer whatever punishment his body can endure, so that at some moment, glory will be at his fingertips.”

The ability to post ads on the Internet has made a big difference, said head coach Gary Patterson, grabbing the attention of fans and media from around the country.

“I don’t think it made a difference with the fans in the stands, but I think notoriety as far as in the state of Texas and getting our name out,” Patterson said. “What people don’t understand is we’re probably more highly respected as a university and as a football team outside the state of Texas than we are in (the state).”

The posters of senior tailback Ryan Christian, senior offensive tackle Marshall Newhouse , junior wide receiver Jimmy Young and the rest of the bunch will certainly be a popular item around campus and the marketing department has prepared for that. Posters and trading cards will be available in the athletic department, the Brown-Lupton University Union, the University Recreation Center and the Mary Couts Burnett Library. It is not the students on campus though that the campaign is focused on, it is the Fort Worth community.

“I think we’re starting to put people in the seats, but I think more importantly it’s given this team, along with its play on the field, an identity,” Patterson said. “I think that’s what I’ve been excited about is being able to get that done.”

An identity. Chalk that up as reason number 99.