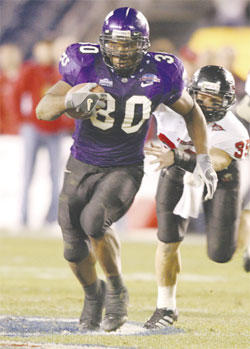 A month after their 37-7 victory over the Northern Illinois Huskies in the San Diego County Credit Union Poinsettia Bowl, head coach Gary Patterson said he and his Horned Frogs are beginning to work towards the 2007 season.Offseason training begins today with spring practices set to commence in March, Patterson said.

The Frogs finished the 2006-2007 campaign with a top 25 ranking for the third time in four years, but Patterson said the ranking may not be indicative of who will pen their name with TCU on signing day Feb. 7.

“We have been in the national ranks at season’s end before,” Patterson said. “But we are looking for young men who are good players that can fit TCU.”

Even though the Frogs will bring nine returning defensive starters to the field in the fall, some holes in the offense will need to be filled, Patterson said.

“You are only as good as your weakest link, and we are looking for a new quarterback,” Patterson said.

At the end of the bowl season, TCU held a No. 21/22 rank in the USA Today and AP polls respectively, despite starting off conference play with back to back losses to BYU and Utah, according to espn.com.

The final top 25 ranking along with three seniors being selected to compete in showcase games are two factors contributing to the recruiting process, Patterson said.

“It helps with recruiting when a TCU player is getting recognition,” Patterson said.

Ballard competed in the Cornerstone Bancard Hula Bowl on Sunday, and Taylor and White will compete in the East-West Shrine Game on Jan. 20 at Reliant Stadium in Houston – the site of the Horned Frogs’ 2005 EV1.net Bowl win.

The NFL Draft will take place three months from now, and Patterson said three or four TCU players may be in a position to continue their football careers after college.