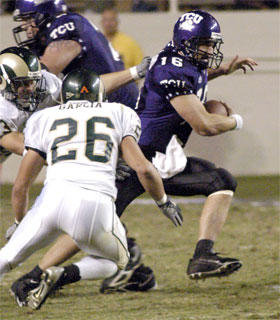 Head football coach Gary Patterson said TCU won’t be accepting any trophies until Saturday.”We want our rings to say 10-1,” Patterson said Tuesday. “It’s all about what goes on the ring.”

Patterson said representatives for the Liberty Bowl approached him after Saturday’s 33-6 win against Colorado State that clinched the Mountain West Conference title during TCU’s first year in the conference.

In spite of the Liberty Bowl’s interest, Patterson said he does not wonder what bowl TCU will go to.

“I’m not closing doors at which bowl game we go to,” he said.

Playing in a new conference is key for recruitment prospects, Patterson said.

Even though TCU was picked to finish sixth in the MWC by media in the preseason, Patterson said, the ranking did not affect the team.

Early nonconference games, such as Oklahoma, were “measuring-stick games” in which TCU was able to gauge its ability.

Patterson said that while some said Oklahoma hasn’t been as good this year, TCU still deserves credit for scheduling games against bigger teams.

He said his team is definitely not looking past Saturday’s game against Nevada-Las Vegas.

“I don’t think it’s any different than any other league game,” Patterson said. “We need to get started fast early.”

“Ten wins is important to this team,” Ortiz said.

The early-season loss to SMU is in the players’ minds, Patterson said.

“The SMU game made our season,” Kesler said. “It made us realize we’re good, but not that good. It made us step up and play.”

Ortiz said the loss helped the team prepare for the conference change.

“The SMU loss catapulted us through those early games,” Ortiz said. “We’ve put ourselves in some bad situations, but we never gave up.”

Patterson said that while TCU played faster and more physical in recent games, he did not understand why many MWC coaches complain after the game.

“Complain before a ball game,” Patterson said. “Don’t do it after the game.