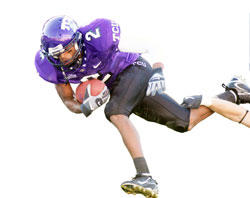 After patiently waiting for 256 days since the team’s last game, the Horned Frogs kick off the 2007 football season against the Baylor Bears on Saturday at 5 p.m. at Amon G. Carter Stadium.TCU comes into the game as the consensus No. 22 team in the country after being voted in the position by both the Associated Press and USA Today/Coaches polls.

While the Frogs are returning from an 11-2 campaign that ended with a 37-7 rout of the Northern Illinois Huskies in the San Diego County Credit Union Poinsettia Bowl, Baylor comes off a 4-8 season that featured TCU topping Baylor 17-7 in last season’s opener in Waco. The Frogs are riding an eight-game winning streak into Saturday’s showdown, winning by an average of more than 24 points per game, compared to Baylor’s four-game skid with an average margin of loss marked at 27 points a game. This is the second year in a row the Frogs will begin the season with an eight-game winning streak.

Head coach Gary Patterson said the team learned from last year that past or present success does not decide the outcome of the game.

“You can throw records out,” Patterson said. “It makes no difference.”

Although Patterson would not divulge the team’s strategy against Baylor, it should be noted that Baylor’s defense allowed nearly 200 rushing yards a game last season and the Horned Frogs’ offense averaged roughly the same total last season. In addition to the rushing game, the Frogs outscored opponents by 172 points in the second and third quarters, while Baylor was outscored in those same two quarters by 122 points.

Patterson said the game could ultimately be decided by converting scoring chances inside the red-zone.

In last year’s meeting, the Frogs were able to rally from a seven-point deficit and overcome Jeff Ballard’s injury thanks to quarterback Marcus Jackson. While the sophomore, then a freshman, gained valuable experience in the Baylor win, redshirt freshman Andy Dalton of Katy will get the starting nod Saturday.

Patterson said he considers both Dalton and Jackson as No.1-type quarterbacks, reiterating a position he has stated since naming Dalton the starter. He said he plans to play Jackson between the third and sixth offensive series of Saturday’s game, a practice he called standard since he has been the head coach.

Dalton said in an Aug. 22 Fort Worth Star-Telegram article he is ready to earn the respect of his teammates leading into Saturday’s game.

“I’ve already started to earn the respect of my teammates,” Dalton said. “I’ve just got to keep working hard and let them know that nothing is going to change, I’m still going to work hard and just prepare the best I can for Baylor.”

Whether Dalton or Jackson is under center for the majority of Saturday’s game, one thing is for certain: The Frogs return eight starters from the nation’s No. 2 defense.

The defensive unit is led by a pair of preseason All-American senior defensive ends in Tommy Blake and Chase Ortiz. The group gave up a hair more than 60 rushing yards a game last season and only allowed 19 total touchdowns as a unit.

“When anybody watches and talks about college football, they know about our defense,” Ortiz said. “We’re a group of older guys, and none of us have any trouble being the backbone for this. As a defense, we have no problems leading the way for our team.