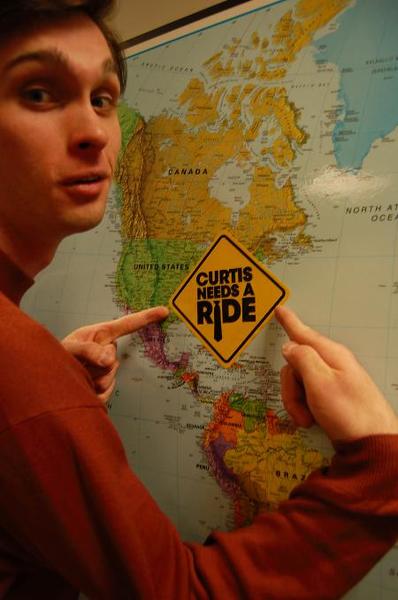 At a time when most students will be graduating and looking for a career, one will pursue his dream of being funny for a living.

Grayson Howe, a senior communication studies major, is a member of the local comedy troupe Curtis Needs a Ride, which he plans to continue performing with after college.

Howe said everyone around him has been supportive of his decision to pursue a career in sketch comedy, even his mother and father.

“You hear so many stories of people saying, ‘I want to do comedy’ but the parents say, ‘Get a real job and be a doctor,'” Howe said. “Fortunately, I haven’t heard that from anybody.”

Howe hopes that CNAR’s recent success will continue to grow so the group will gain more local experience, he said. The group just signed with The Mary Collins Agency and has secured a home at the Four Day Weekend Theater downtown where they perform weekly.

“I’m hoping that I will be able to continue with Curtis Needs a Ride and be able to feed myself through comedy,” Howe said.

In the future, however, he would like to go to Los Angeles or New York and gain success in the spotlight, Howe said.

“In a perfect world, at some point I will be on Saturday Night Live, which is the pinnacle of sketch comedy,” he said. “It’s extremely competitive and subjective as to what’s funny, but I feel like it’s a definite possibility.”

Fellow CNAR member and TCU alum Michael Flusche praised Howe’s unique ideas and dedication to his role. Flusche called Howe his close friend and said he deserves a lot of respect for his creative abilities and work ethic.

“He is one of the best actors I know,” Flusche said. “When you mix that with comedic thinking and comedic timing, it’s an awesome thing.”

Howe’s interest in comedy began when he took a six-week course on improvisational comedy his freshman year at Colleyville Heritage High School, Howe said. The comedy class along with his involvement in theatre throughout high school influenced his passion for comedy.

His love and need for comedy influenced his decision on what college to attend, he said. He wanted to attend a college that had a successful comedy troupe, Howe said.

During his first semester on campus in 2006, Howe filled in for Senseless Acts of Comedy cast members who were unable to make shows, he said. Following his success, he joined SAC as a full cast member his second semester. Howe joined Curtis Needs a Ride shortly after that, he said.

Ricky Anderson, the current president of SAC, said Howe seemed very quiet and to himself when they first joined the improv troupe. That changed when it was Howe’s turn to improvise, Anderson said.

“He started performing and improvising, and I was blown away,” Anderson said. “I just remember thinking, ‘Whoa! This guy is good.'”

Anderson said the past two years that they have improvised together have been exciting and memorable.

“Grayson lives his life as an improviser,” he said. “He can see the funny in just about any situation, and he has an enjoyable presence that everyone loves to be around.”

Howe continued his improv training through a program ran by Four Day Weekend in spring 2007, he said. The training ranged from those who wanted to have careers in comedy to those who were just interested in it in general, Howe said. He said the training helped him establish his character and learn the fundamentals of improv.

“It was cool to see people finally breaking out of their shells,” Howe said.

CNAR performs every Thursday at 8 p.m. at the Four Day Weekend Theater in Sundance Square.