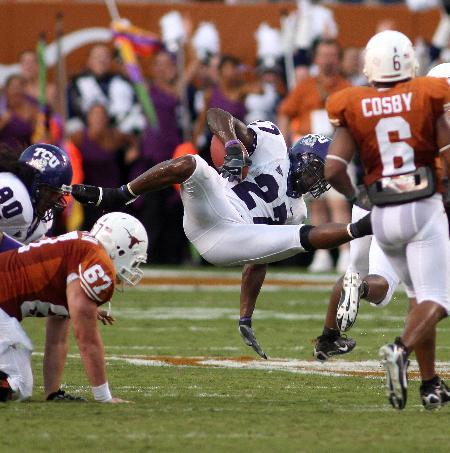 After starting the year ranked, the TCU football team had its struggles but finished strong with a win over the University of Houston in the Texas Bowl. The good times continue to roll with the invitation of four players to the 2008 NFL Scouting Combine in Indianapolis.

The combine invited four of TCU’s defensive starters to showcase their skills in an event that could propel them to the NFL.

Defensive end and preseason All-American Tommy Blake, safety and return specialist Brian Bonner, safety David Roach and defensive end Chase Ortiz will all be representing the Frogs at the combine.

Blake was named to several preseason All-American and award lists, but medical problems kept him from reaching his full potential during his senior campaign. A running back in high school, Blake finished his career at TCU as one of the school’s most successful and intimidating defensive players, finishing third on TCU’s all-time sacks list with 23.

Bonnner finished his senior season just 15 yards shy of the TCU record for punt return yards, second only behind famed Sammy Baugh. Bonner was named to the All-Mountain West Conference team as a returner the past two years and was also named to the list in 2006 as a safety.

Roach started all 13 games this season and had a career-high with 76 tackles. He was named to the second-team All-Mountain West Conference and finished tied for second on the team with seven pass break-ups.

Ortiz, similar to Blake, finished his time at TCU as one the most prolific sackers, with 20.5 sacks, making him good for fifth on the all-time list. This past season he led the team with nine sacks and 16.5 tackles for loss.

Blake, considered to be a possible top recruit out of TCU, appeared to be hampered by injury during his playing time and out of shape at the end of the season.

Based on Blake’s speed, athletic ability and preseason awards he could be a late round pick, but teams might be scared by his medical absence his senior year.

Beginning in February, the Combine has invited more than 300 players to participate.

Defensive ends Ortiz and Blake will show their skills Feb. 23, while defensive backs Bonner and Roach perform the 24th, according to the official NFL Combine Web site.

The combine helps determine a players draft stock. Since head coach Gary Patterson has led the team, 16 players have been drafted.

All four players have already earned their degrees and graduated from TCU.