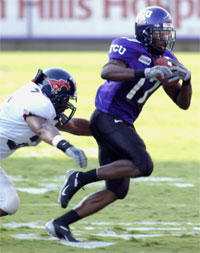 Cory Rodgers and Quentily Harmon said they realize their time is now, and they are prepared to step up.”It’s all about taking advantage of the opportunities,” Rodgers said. “We’ve learned that from a great player.”

That great player, he said, is Reggie Harrell.

Harrell played four seasons for TCU and became the first Horned Frog to break the 1,000-yard reception plateau in only two seasons.

Patterson said Rodgers and Harmon are also important to the team.

“Cory started to take on more of a leadership role towards the end of last season,” Patterson said. “He and Quentily both understand the intensity you must have and how you must play each game.”

Rodgers amassed 98 catches during the two seasons he played with Harrell.

Although slowed by injury at the end of last season, Harmon had 20 receptions for 319 yards in just eight games.

The receiving duo said they are ready this year to apply what Harrell taught them.

“It’ time for us to share (Harrell’s) knowledge with the younger players on the team now,” Rodgers said.

Harmon said he agreed with Rodgers’ comments on Harrell.

“It’s a business,” Harmon said. “That’s one thing he taught us. Our time is now, and there is no coming back.”

Rodgers and Harmon said they still talk to Harrell on the phone and do their best to encourage him while he tries to find a spot on an NFL roster after the Dallas Cowboys waived him Monday.

“I just tell him to keep his head up,” Rodgers said. “You know, you (are going to) struggle sometimes, but you got to just keep believing you will make it. That’s the main thing I try to stress to him.”

Both players said the thought of playing with him again one day is in the back of their minds.

“We have talked about it,” Rodgers said with a grin. “I loved every minute I played with him, and maybe I’ll get to soon someday again.