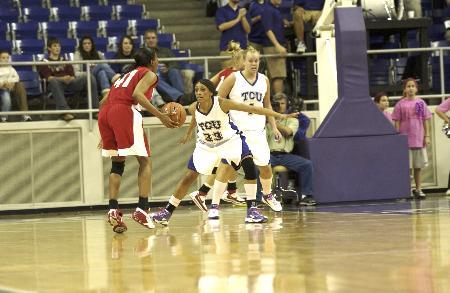 Former TCU guard Adrianne Ross was not selected in Wednesday’s WNBA draft, but will attend club tryouts in an attempt to join a league roster.

Ross, who recently participated in the WNBA’s Pre-Draft Camp, said she is still fighting to make a team, and her agent is taking calls from interested personnel.

The next step for Ross is to evaluate team rosters and decide which camps she wants to attend.

Ross said she is uncertain which teams she will attend camps with, but said she, her agent and TCU head coach Jeff Mittie have been going over possibilities.

Ross’ agent Jeanne McNulty-King said she hopes to hear from teams as early as today regarding camp invitations, but said they have until April 20.

McNulty-King said Ross, as a non-draft rookie, becomes a standard free agent. If Ross is signed she will receive a rookie minimum one-year contract, McNulty-King said, which is the usual length for most players.

The WNBA recently updated its Collective Bargaining Agreement. McNulty-King said the updates dealt mostly with slight increases of minimum salary and would have little effect on Ross’ contract.

Entering selection day, Ross said she knew it was a loaded draft, and great players were going to be left off.

“I had the feeling that I had to be optimistic, but there are so many good players,” Ross said later.

Ross said she sat with teammates in front of a TV and waited for her name to appear, an experience she said the group has gone through before.

“You want to see your name pop up,” she said. “It’s not that different from Selection Monday for the tournament.”

Ross said Mittie thought it would be a better idea for her to enter the league via the free agent route.

“The only difference now is I’m not just being picked. I get some say as to where I go,” she said.

Had she been chosen, Ross would have been the Lady Frogs’ second player drafted by the WNBA, joining her friend and TCU director of basketball operations Sandora Irvin, the No. 3 pick in 2005.

Her path to professional basketball might not be completely limited to the WNBA. Ross said WNBA players often play overseas in the off-season, and said it is definitely a possibility down the road, but for now she is concentrating on the WNBA.

“It’d be out of my character to back down from a challenge,” she said.