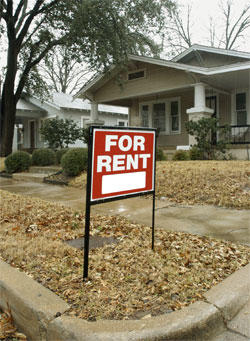 Where there’s thunder, there’s lightning.And for residents in Bluebonnet Hills, a neighborhood located near TCU, the rumblings began almost two years ago.

It started with groups of as many as five people – or sometimes even more – living together in rental homes. Then residents began noticing parking congestion on their streets. Soon after, it was parties and alcohol consumption that caused some residents to consider moving, said Jim Johnson, Bluebonnet Hills Neighborhood Association president.

The storm may have spread across Fort Worth.

Because of the number of concerns voiced from Fort Worth homeowners and neighborhood associations, the Fort Worth City Council oversaw the creation of a Rental Registration Task Force a year ago , a combination of homeowners, realtors, Chamber of Commerce representatives and other organizations.

The task force has discussed lowering the number of unrelated adults who may live together in a rental home. Currently, the number in Fort Worth is set at five, according to the Fort Worth Municipal Codes. If the number was lowered, off-campus students would have to live with fewer roommates.

Since the ordinance change would affect the entire city, there would be no way to cut the TCU neighborhood out, said Anthony Snipes, assistant to the city manager.

“They will be impacted by the change,” he said.

For now, efforts toward reducing the number are at a standstill. At an Oct. 12 meeting, the task force decided to hold off sending the unrelated adults recommendation to City Council.

But efforts to address residents’ concerns are not over.

Mike Russel, associate dean of campus life and TCU representative on the task force, said the unrelated adults issue came up because of off-campus student housing.

“It became an issue for some neighborhoods because of students’ behavior,” Russel said.

And in Bluebonnet Hills, Johnson said, the problem behavior has been going on for a long time. About two years ago, “there were kind of rumblings,” he said.

“You would hear complaints every now and then.”

Since then, Johnson has spoken with neighbors who have as many as five or more college students living near them.

These conditions bring up concerns such as neighborhood parking congestion, the need for stronger law enforcement and the shifting of single-family homes for rental purposes.

During the Oct. 12 meeting, members voted to give the City Council the following recommendations: a resident-parking-only permit program; rental registration for all rental homes; a proposed definition of a secondary dwelling and an amendment to the Nuisance Abatement Ordinance.

A majority of the task force wants to see how these measures will impact parking, noise and overcrowding before moving ahead with the unrelated adults recommendation.

Before the City Council approves the task force’s recommendations, it will have a public hearing for residents.

Marilyn Gilbert, a task force member and Fort Worth Chamber of Commerce executive vice president, said if people are upset at the public hearing because of the unrelated adults issue, they will not agree with the task force’s other recommendations.

“I’d like to see the first four things, because they are not as divisive, before we go this direction that is divisive to a large portion of the community,” Gilbert said.

Johnson, who is one of two task force members who voted to proceed with the unrelated adults recommendation, said he is concerned that if the issue is not brought up now, that it will not be revisited.

This is because it could take until May or June for any council-approved changes to be enacted, and then at least another year to see if those changes work, Snipes said during the meeting.

“Eventually we’re going to get tired of this,” Johnson said. “I think we need to get it out there. People need to have their say.”

Snipes said the unrelated adults issue is by far the biggest and most divisive topic the task force has dealt with.

“We have to be really careful,” Snipes said. “Because when you start putting in poverty, race and all these other things in the pot … you have so many different perspectives. When we have hundreds of folks coming in to city hall, it’s impactful to the council folks.”

The discussion to lower the number of unrelated adults has been met with resistance.

Jill Wachter is a resident of University Place, another neighborhood near TCU. Wachter, who rents out a home on Rogers Avenue, said she does not want to see the number of adults allowed in a rental home lowered.

“Neighbors don’t come by category,” Wachter said. “You can’t categorize people because they’re a certain thing. You have to go by who they are. If a student is the worst person you have to live next door to, then you’ve led a sheltered life.”

Adam Richardson, a senior speech communication major who lives with two roommates on Waits Avenue, said he does not think the number of people living in a home is a direct correlation to noise and parking issues.

“It seems to me that’s making a lot of assumptions. Assumptions that everyone living in the house has a car, or is noisy, or when more people are together that they are more prone to be noisy,” Richardson said. “It just seems like a weak argument.”

Dale Erwin, president of the Greater Fort Worth Association of Realtors, which is represented on the task force, said from a property rights standpoint, an issue is whether the city has the right to tell private property owners how they may rent out their homes.

“On the flipside, if you’re going to buy a residence around TCU that is in a classy, high-dollar neighborhood, you need to expect that you will have rental properties around your home,” Erwin said.

Fort Worth is not the only city in Texas that has considered lowering the number of adults allowed to live in a rental home.

In Lubbock and San Marcos – home to Texas Tech University and Texas State University, respectively – only two unrelated adults may live together in a rental home. However, Snipes said, the cities with that ordinance are much smaller than Fort Worth. In comparison, Austin and Houston’s city ordinances allow six unrelated adults to live together and Dallas’ ordinance allows four.

In Bryan, one of the cities in which Texas A&M University is located, neighborhood associations are currently at the forefront of efforts to decrease the number of unrelated adults in rental homes from four to two.

The complaints are typical of neighborhoods near universities: noise, cars blocking neighborhood streets and trash and furniture in yards, said Stefanie Stefancic, coordinator of off-campus student services at Texas A&M.

Stefancic said the complaints are coupled with the fact that the 35,000 off-campus A&M students, some of whom live in Bryan, prefer to live in duplexes and rental houses.

Additionally, the Blinn College Bryan campus has more than 10,000 students who also live off campus.

At TCU, by comparison, more than half of the 7,171 undergraduates live off campus. According to the TCU Fact Book, 46 percent of TCU students live on campus.

Brewer said people may choose to live together after college for financial reasons. If the number of people allowed to rent a home together were reduced, then those people would have fewer roommates to split rent.

“Not everyone who lives together and is not related will be gone in two years. Some stay for more of an extended period of time,” Brewer said. “I can see how if it’s not done carefully, it could screw up a lot of people.