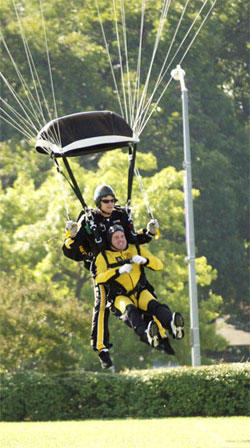 The Army’s Golden Knights allowed two of TCU’s own to participate in a practice jump Friday morning in preparation for Saturday’s Homecoming game.Head football coach Gary Patterson and Mary Volcansek, dean of AddRan College of Humanities and Social Sciences, tandem jumped with the Golden Knights as part of an exhibition jump that doubled as preparation for the dropping of the game ball.

Volcansek and TCU Media Relations said no media were allowed at Fort Worth Alliance Airport, but there was a small crowd of spectators awaiting them at the Intramural Fields.

Neither participant jumped out of a plane at 12,000 feet on a whim.

“It’s just one of those things I’ve always wanted to do,” Volcansek said. “Now all that’s left is riding in a hot air balloon.”

Patterson said he’s crossed skydiving off of his “50 things I have to do” list.

“The older you get, the more things start falling off the list,” Patterson said. “I’ve bungee jumped, and I’ve just started scuba diving.”

The two had been approached by the Army ROTC previously, but due to previous commitments, they declined.

“I was asked to do it a couple years ago and didn’t,” Patterson said. “I did it to bring support to our Armed Forces.”

Volcansek’s situation was a bit different.

“I was jump-qualified, but I never experienced a jump,” Antrum said.

Neither Volcansek nor Patterson expressed feelings of nerves before the jump.

“These guys have done this so many times that you can just see the confidence in their eyes,” Patterson said.

Volcansek said the professionalism of the Golden Knights kept her nerves down as well.

“I said a quick prayer before just in case,” Volcansek said.

Volcansek said it all happened rather quickly.

“One moment (Patterson) was there, and the next he wasn’t,” Volcansek said.

Volcansek said the Knights were trying to get her to pose at the camera, but she was too concerned with admiring the campus.

“It really is a beautiful campus, and we got a hawk’s eye view,” Volcansek said.

Patterson said all the homecoming decorations made for an even more amazing view of the campus.