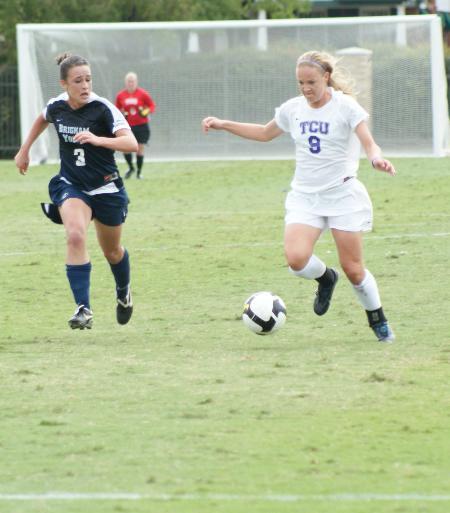 Soccer head coach Dan Abdalla said he knew freshman forward Jordan Calhoun was good, but little did he know what was to come of her first season with the Horned Frogs.

In her first 15 games as a Horned Frog, Calhoun has netted 13 goals, putting her two away from the single-season goal record. Calhoun passed Sherry Dick and Jill Cook, who both scored 11 goals in a season, to take sole possession of second on the scoring list after her game-winning goal against Air Force on October 12. Calhoun is now chasing the first place mark of 14 goals set by Sarah Campbell in 1986.

“I know what they’re going to do on and off the field, what their tendencies are,” Calhoun said about her three former ESC teammates.

Now with 13 goals, Calhoun is tied for fourth in goals in the nation and is 23rd in points per game. While some players have to go through a transition period to become accustomed to the collegiate game, Calhoun said she immediately fit right in.

“The game didn’t change drastically for me, like it has for other players,” Calhoun said. “There wasn’t a big surprise for me.”

If Calhoun’s success in scoring can be credited to any luck at all, it might be from her gameday rituals. She begins her day with an omelette for breakfast, and before the game she always puts her left shin guard on before her right, a superstition she said she’s had since she was little. Also, since she’s been in college, her and teammates, junior forward Lizzy Karoly and freshman midfielder Katie Runyon, have started a halftime tradition of their own.

“Lizzy and Katie Runyon and I all, at halftime, eat gummy snacks, gummy bears or Skittles,” Calhoun said.

Despite being on the brink of a scoring record, Calhoun said her ultimate goal for the season is a Mountain West Conference championship. She said the team needs to keep working together and moving forward to achieve postseason success.

“We knew she had the ability to be good,” Abdalla said. “You never know how good a player is going to be, but she’s obviously made a huge impact. Everyone is making each other better players, and with Jordan everyone can relax and play their game.”

With three games left, Calhoun only needs two goals to set the TCU scoring record. When asked if she thought she could break the record she replied with a quick and firm, “Yes.”

Calhoun has one more opportunity to clinch the record at home Friday against UNLV, then for their last two matches, the Frogs travel to Lubbock to face Texas Tech and then wrap up the regular season against San Diego State