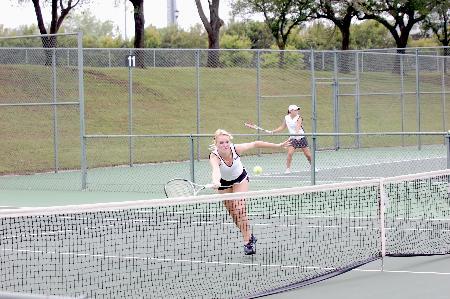 Short one junior veteran, the TCU women’s tennis team relied on freshmen to lead the way to a win over the University of Wyoming in the quarterfinals of the Mountain West Conference Tennis Championships.

Junior Macall Harkins, TCU’s No. 2 singles player and a member of the squad’s No. 1 doubles team, was a game-time decision to hold from TCU’s first game of the tournament. Harkins said she felt sick and her coach thought it would be best for her to rest.

Without Harkins, head coach Jefferson Hammond shifted all players below Harkins up one spot in singles.

In her absence it was the team’s three freshmen who shined brightly for the Horned Frogs, winning each of their singles matches and pushing TCU to a 4-0 win.

Hammond, who was recently named the Mountain West Conference Coach of the Year, said the freshmen’s transition was big for the team.

TCU’s three veteran singles players were all down one set to none before the last freshman on the court sealed the win for the Horned Frogs.

“You don’t really expect that from freshmen, especially in their first conference tournament,” Hammond said. “With the crop we have it doesn’t surprise me. They’re pretty fearless for the most part.”

Maria Babanova was the next freshman to come through for the team, beating Brittany DeFelice 6-2, 6-4.

Babanova said it was great to see the freshmen step up for the team.

TCU also won the doubles point, overcoming a few transitions forced by the loss of Harkins.

Replacing Harkins in the team’s No. 1 doubles pair with junior Anna Sydorska was senior Andrea Morgado, who had not played in a match in 2008.

The No. 3 team of Nina Munch-Soegaard and Babanova switched with the No. 2 team.

Tuohimaa was bumped from her usual spot in the No. 2 group with Hertzberg and replaced by senior Kewa Nichols.

Hammond said he is excited about how his new doubles teams handled the change.

“Two of the teams hadn’t played, we’ve got the talent so we knew if we just focused and played high-percentage tennis that we could do well,” Hammond said.

Hammond said he could not comment on whether Harkins would be cleared to play tomorrow.

Harkins said she thinks she will be well enough to play in tomorrow’s semifinals.

TCU will face the University of Utah, which shut out Brigham Young University 4-0 on Thursday.