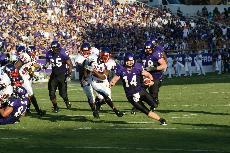 Stephen F. Austin watched as the Horned Frogs ran through purple and white fireworks to open Amon G. Carter Stadium for the year on Saturday. Unfortunately for the Lumberjacks, the fireworks continued when TCU’s offense took the field.

Junior tailback Joseph Turner’s three rushing touchdowns fueled a 67-7 beating of the visiting Lumberjacks. The 67 points scored in a game was the second most in school history. TCU scored 68 in 1932 against Austin College.

“If you could write a script (for this game,) this would be what you wanted,” head coach Gary Patterson said after the game.

SFA struggled to move the ball against a Horned Frog defense that has played similar spread offenses, such as BYU and Texas Tech, in recent years, though Patterson spoke highly of SFA’s skilled position players and said he expects the Lumberjacks to greatly improve on their record from last year as sophomore quarterback Jeremy Moses improves.

Offensively, the Horned Frogs cruised through the defense on the ground. As a team, TCU averaged more than five yards per carry.

“I was happy with the offensive line all night,” Patterson said. “We knew that (SFA) doesn’t practice against tight ends or a power offense very much, so we felt like we could line up and run a power game.”

When the Frogs went to the air attack, it was just as effective.

Sophomore Andy Dalton was the starter, but it didn’t take long for junior Marcus Jackson to get time under center. Dalton had a near-perfect first quarter, completing 10 of 11 passes for 116 yards, and he came out of the game early in the second quarter but returned in the second half. He finished the day with 131 yards through the air and completed 11 of 13 passes. Jackson threw for 74 yards with one touchdown and ran for another 47 yards on eight carries.

Jimmy Young had the best receiving night of the Horned Frogs, catching seven balls for 104 yards.

“I was excited to get into this game,” Young said. “We had a good game plan coming in, coach had us really prepared, and we were really confident in our offense.”

The team didn’t miss star senior linebacker Jason Philips, who was out with an unspecified injury, but will likely need his help at home next week against a Stanford team with a strong running game.

“(Jason Phillips) could have played tonight if we wanted him to,” Patterson said.

Now the team turns its focus to Stanford, the third game in a string of 11 straight weeks.

“When you play 11 straight weeks, you have to manage the game and manage the season,” Patterson said. “(In the second half), we ran the ball, ate up the clock and scored a couple of times. We did exactly what we wanted.”

Stanford will prove to be a tough test, Dalton said.

“It was a tough game last year, and it will be just as hard this year,” he said. “We just have to turn our focus to them and study them and work hard this week.”