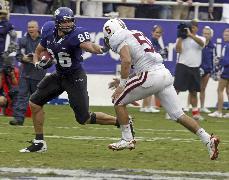 Playing in the remnants of Hurricane Ike, the TCU Horned Frogs claimed their third win of the season Saturday with a 31-14 victory over the Stanford Cardinal.

“I never thought I’d have so much fun playing in the rain,” said TCU quarterback Andy Dalton.

TCU (3-0) had four rushing touchdowns scored by four different players and their defense held the Cardinal to under 200 total yards of offense. The Horned Frogs also dominated the time of possession 39:29 to 20:31.

This is the second time in as many seasons that TCU has beaten Stanford. Last year the Horned Frogs defeated the Cardinal on the road 38-36.

“A lot of the kids from over there said that our win was a fluke last year, so they’ve [the Horned Frogs] been ready for this one for a while,” said TCU head coach Gary Patterson.

The Horned Frogs were consistently able to run the football — something Stanford struggled to do throughout the game. The Frogs rushed for 233 yards while holding their opponent to just 73 yards. Sixty-eight of Stanford’s 71 rushing yards came on two plays.

TCU jumped out to a 14-0 lead early in the second quarter after scoring runs from Justin Watts and Jeremy Kerley.

But mistakes by the Horned Frogs allowed Stanford to stay in the game.

The Cardinal answered the Horned Frogs’ second score less than two minutes later with a touchdown on an impressive 38-yard run by Doug Baldwin.

TCU went three and out on their next offensive drive and were forced to punt. Stanford blocked the punt and Richard Sherman ran the ball back 21 yards to tie the game at 14.

“We tried to give it away on special teams,” said Patterson. “That was the one part of the game I was not very impressed with.”

TCU went back on top early in the third quarter when Ryan Christian ran the ball in from one yard out.

The game’s turning point occurred when Stanford’s Doug Baldwin appeared to return a punt for a touchdown after TCU’s first drive of the fourth quarter stalled out. After review it was determined that Baldwin stepped out of bounds at TCU’s 13-yardline.

“The defense stepped it up after that, so did the offense,” Coleman said. “It was definitely a momentum changer.”

TCU kicker Ross Evans connected on a 23-yard field goal with 4:05 remaining in the game to put the Frogs up by 10.

Defensive end Jerry Hughes forced a Stanford fumble on the very first play after the TCU field goal and the Frogs recovered the ball.

Dalton sealed the win with a 10-yard touchdown run on fourth-down with 1:04 remaining, his fourth rushing touchdown of the season.

Dalton has now rushed for 163 yards 37 carries this season.

“We’ve got a lot of guys that can run the ball,” said Dalton. “When I get my number called I like having the ball in my hands.”

Coach Patterson was pleased with the team’s overall performance.

“Our goal was to get to the end of this game any way we could do it and be 3-0,” Patterson said.

TCU will head across town to face SMU in the Battle for the Iron Skillet next Saturday at 7:00 p.m.